This crop circle is one of two circles to appear near Stratford-Upon-Avon in Warwickshire during 2015 – the other being the eight-fold star at Haselor, near Alcester. It measures approximately 120ft in diameter and is in a field of mature wheat. It was first reported on the 8th of August by a pilot flying from nearby Wellesbourne Airfield and has been reported widely in the local press in that area.

It was not until yesterday (15th of August) that we managed to arrange a flight over the circle. The UK has been subject to some pretty bad weather in the last week with torrential rain and thunderstorms sweeping across the country, but even yesterday the flight was risky as there was a huge amount of cloud cover and not many breaks for the sunshine to come through. It’s a 5 hour round trip drive for us to fly from Wellesbourne Airfield from our home on the south coast, so we were hoping beyond hope that we might get a glimmer of sunshine for our trouble. As you can see from the pictures below, the Gods smiled on us and we got our sunshine.

This formation was quickly named the ‘Dove’ for obvious reasons, and its connection to Christian iconography is equally obvious. The dove has been used as a symbol for the Holy Spirit almost since the inception of Christianity. The Holy Spirit appears as a descending dove during the baptism of Christ and it is used on Holy Communion medals given to young Catholics at their first communion. It is also sometimes impressed upon the communion wafer itself. But as far back as Ancient Egypt birds were associated with the spirit, a bird with the head of a human represented the human spirit freed from the body and was regularly used in funerary paintings and reliefs.

More generally, the dove is an internationally recognised symbol of peace. Doves are often released at peace rallies and as an act of remembrance for those lost in war. With this in mind, it is the second crop circle to appear in the form of a symbol of peace during 2015 – the first being at Stanton St. Bernard earlier in the season, where the logo for the Campaign for Nuclear Disarmament (CND) appeared. Doves were recently released in Hiroshima and Nagasaki to remember those who died in the nuclear attacks there 70 years ago.

To me, nothing could be more cognisant with the crop circle phenomenon than these reminders and appeals for peace – not only in our world, but also in our own community. I wonder if we are listening?

Finally, some say they see the iconography of an eye upon each wing of the dove, if so this may free the symbol from a strictly Christian interpretation, and point to a wider sense of the Divine. The eye, apart from its connection to secret societies is a regular part of shamanic visions, in which it is seen as the eye of consciousness, the spirit of the earth or the divine source of all things.

As we left the formation to return to the airfield, we noted that it was one of the last fields standing in the area. Clearly the harvest is now well underway and we are fast approaching the close of another crop circle season.

BLOG: You can now read more about this formation in a blog by Karen Alexander here 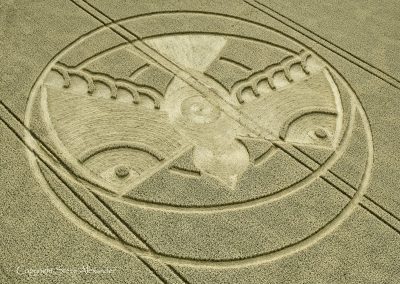 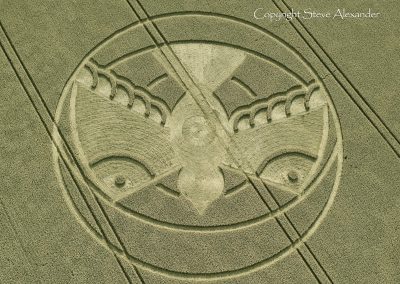 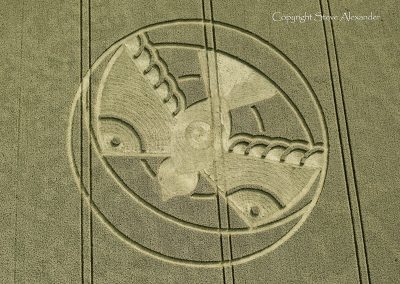 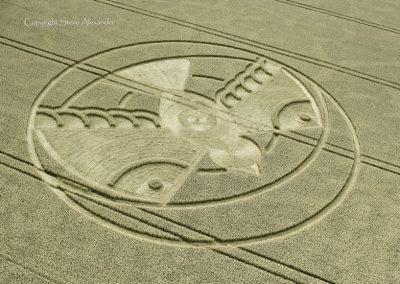 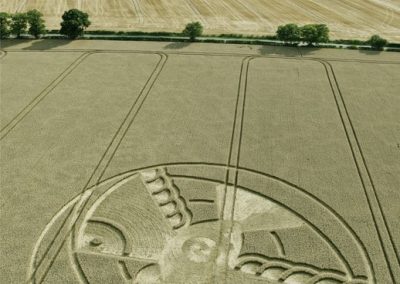 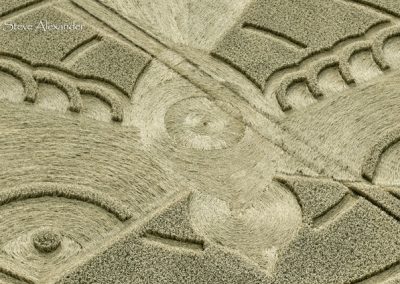 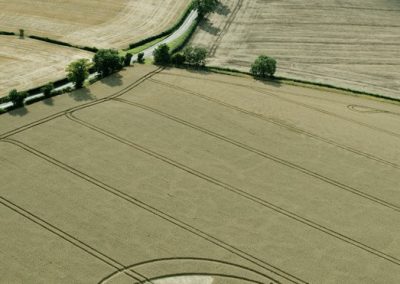 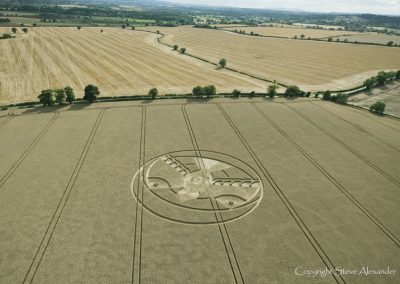 This formation was particularly tricky to draw as the original was asymmetrical in several instances. The first question one has to ask is which way up are you going to draw the bird? – ascending or descending  – because it could be either. I decided in the end I would draw it ascending, this is just a personal preference rather than indicating any certainty of a specific, definitive orientation. In the original (when viewed as ascending) the drawing is larger on the righthand side – obviously the other way around if drawn descending. This is a fascinating detail – right and left hemispheres of the brain, conscious and unconscious. The dove sits in an ‘almost Vesica’, not fully realised in the formation, but has the implication of an eye-shape. This bird also has two eyes (one on each wing) which gives it a butterfly-esque quality. There are ten small circles which make up the feather details on the bottom of the wings (five on each side). However, when I contemplated this design recently I suddenly saw something else for the first time – that the body of the bird is also an eye (woven in to the laid crop – take a look again at the photos), this bird therefore has a hidden third eye.

I had to idealise this formation to draw it with any coherence using compass and straight edge, even so the exercise was really useful, in discovering the differences between right and left and contemplating the design in general. The third image is a painting I did recently ‘Vesica as Eye’ that was inspired by this formation. Hope you enjoy the pictures! 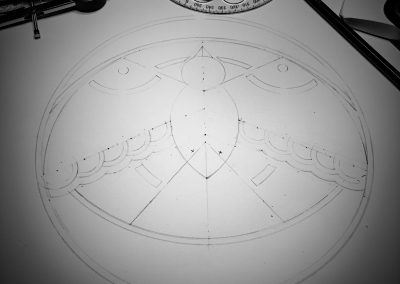 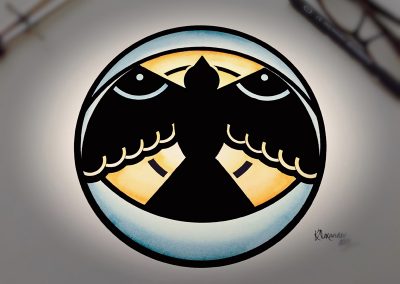 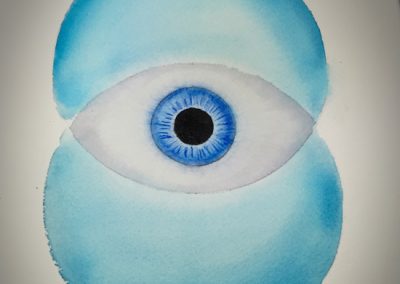