Peace (and disarmament) in the Pewsey Vale?

This circle was reported on the 16th of June by the junction of Devizes Road and the trackway leading up to the top of Milk Hill. It measured approximately 150ft in diameter and was in a field of green wheat. The formation was left intact for one to two days, but then the farmer cut the flattened wheat out from inside the formation. No doubt this was in part to discourage visitors, but also to stop seeds becoming impacted in the soil where people trample the flattened crop. This is one of the main causes of so called ‘ghost’ formations and is a great nuisance to the farmers. Although I have not heard this from any channels, I would take it as read that the farmer wants no vistors.

I have to say, I was greatly moved by this particular symbol being placed in the Stanton St. Bernard/Alton Barnes area. This historical crop circle hotspot has become a place of some conflict in recent years with many farmers tiring of the proliferation of circles on their land. It’s a sad situation, with no resolution at present. But one hopes this symbol will work its magic and begin a period of healing in this part of the landscape. 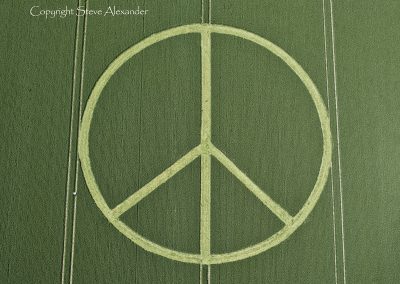 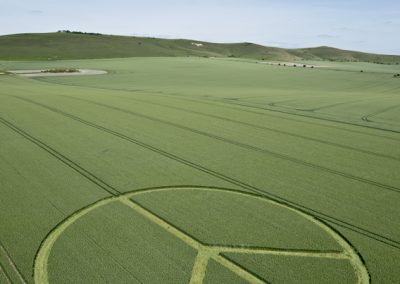 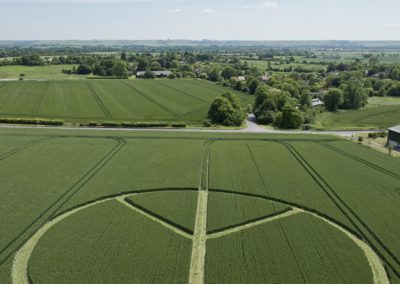 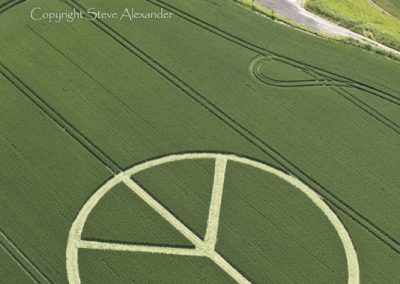 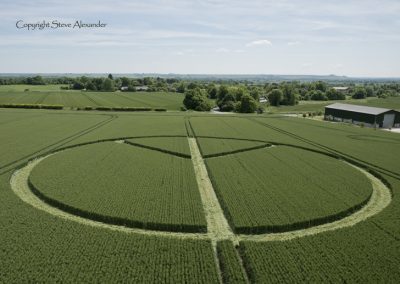 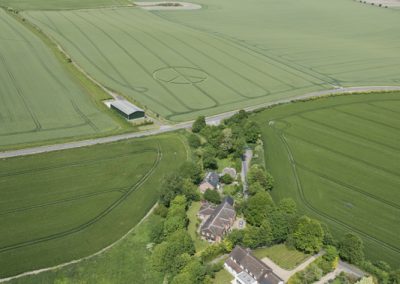 This formation was the classic peace or nuclear disarmament symbol. The arms are placed at 60° angles  from the centre line. Very simple, but very satisfying. It was designed in the 1950s by Gerard Holtom for the British Campaign for Nuclear Disarmament (CND) and specifically for a march from Trafalgar Square in London to the Atomic Weapons Research Establishment in Aldermaston in 1958. The design eventually began to be used more widely as simply a symbol of peace.

The symbol has been so widely used and adopted that it is now recognised as the official Unicode symbol for peace (U+262E).

I may at some point make a drawing of this iconic design. But as it would add little to our understanding of it’s geometry it would be something I may do after the conclusion of the season. Needless to say if I did I would post the images here! – Karen Alexander