Welcome to a quick Crop Circle 101…

What are Crop Circles?

Crop Circles are geometric patterns that appear mysteriously in crop fields. The crop is not cut, but is usually laid flat and most often swirled into an attractive floor pattern. Most patterns appear in cereal crops such as wheat and barley, but circles have been known to occur (in lesser numbers) in oilseed rape, maize, linseed, grass and even borage – to name a few. In the US many circles appear in soya, as it grown prevalently in that part of the world. 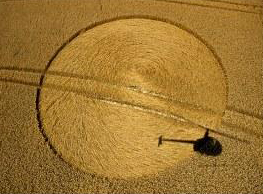 When and where do they appear?

Although it might seem obvious, crop circle occur only during the crop growing season. In the UK the first circles can start to occur in April and May, reaching their height in late July and August. Crop circles do in fact occur all over the world in many countries and obviously they similarly follow growing seasons in that particular part of the world. In the UK most circles occur in the county of Wiltshire, although circles do happen (in lesser numbers) countrywide. In the early season (April/May) numbers are few but this gradually builds up as the summer moves on, at the height of the season (Late July/August) several circles can appear on one night. The season ends with the harvest – and the slate is wiped clean for another year. The crop circles do seem to have an affinity for ancient sites. Many circles appear close to stone circles, barrows, earthworks and other landmarks. Stonehenge and Avebury have played host to many crop circles over the years. The Crop Circles usually appear overnight, in the few short hours of darkness in the summer months. Most are completely perfect at first-light with no flaws in their designs! 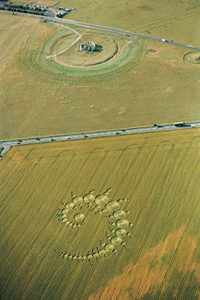 How large are the crop circles?

Crop Circles can range in size from only a few feet across to several hundred feet in diameter. Sometimes larger designs are accompanied by a smattering of tiny circles (some barely a foot in diameter) these are referred to as ‘grapeshot’ or ‘satellite’ circles. One of the largest designs recorded appeared at Milk Hill, in Wiltshire, it measured over 900ft in diameter and the design was made from 409 circles all arranged in a circular spiral. The 409 circles circles in the formation ranged in size from 70ft down to about a foot in diameter! However, all this said, the average size for a crop circle is around 200-300ft in diameter – still no small feat! 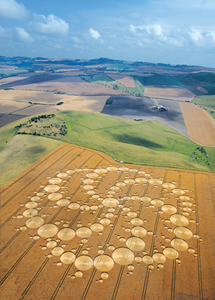 How long has this been going on?

There is an ongoing debate between researchers as to the longevity of the phenomenon. Essentially two camps exist within the debate; those who believe that the crop circle phenomenon is a relatively modern occurrence beginning in the mid 1970’s and those who believe that there are reports going back to the beginning of the century and even earlier. The first circle photographed (documented) in the UK was in 1976, however many farmers report circles in their fields going back considerably further than this date. There is a woodcut dating back to the 1600’s known as the ‘Mowing Devil’ which seems to show some kind of circular pattern in a crop field, however opinion is divided as to whether this can be directly linked to the crop circles or not. 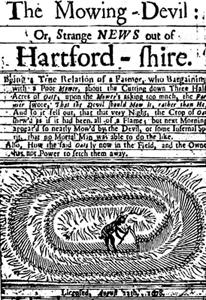 What makes the crop circles and what do they mean?

There are many theories about who or what makes the crop circles. Whirl-winds, earth energies, extraterrestrials and human hoaxers to name but a few. What makes the crop circle subject so fascinating is that anyone and everyone can take part in the search for answers. There has been some very interesting scientific work carried out on the crop and soils from the circles which should be investigated by all those with an interest in the phenomenon. You can find a link to the specific website carrying the work here: www.bltresearch.com Much the same goes for the ultimate meaning behind the designs, there has been some fascinating research into the geometry and mathematics of the crop circle designs and shapes, which suggest that the designs are not arbitrary or meaningless, but quite the opposite. People have connected the circles to subjects as diverse as star constellations and quantum physics to alchemy and spirituality. Some of the most fascinating research is concerned with shape and vibration (Cymatics) and the collective unconscious. If you are interested in getting a good overview of the subject please try our book CROP CIRCLES: Signs, Wonders & Mysteries. It gives a good overview of the subject from many angles and contains around 280 colour images of the crop circles. A good place to find out about the circles and about the very latest thinking and research into the circles is to attend one of our online and conference events. It’s also a good place to meet like-minded people. 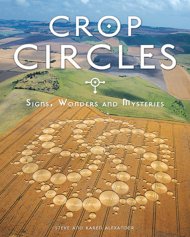 Can I visit the crop circles?

Yes. There are farmers who will allow the researchers and the public on to their land to visit the circles. Please only enter a circle if you have permission from the farmer. Please see our ‘Visiting the circles‘ section for important information, guidelines and advice. Please check out the ‘Latest Circles‘ section of our website to see the very latest circles to have appeared, before planning your trip. You can also visit the Henge Shop in Avebury for the locations of the latest circles. Avebury is right in the centre of crop circle country in the UK. Please don’t phone the shop (they get very busy in the summer), but call in, they have a map of the area with the latest circles marked on it. They also carry a stock of our latest photographs and books. Click on the link for information about the Henge shop and how to find it. 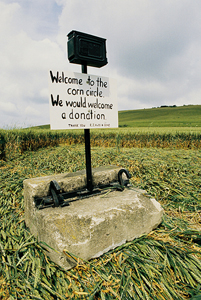