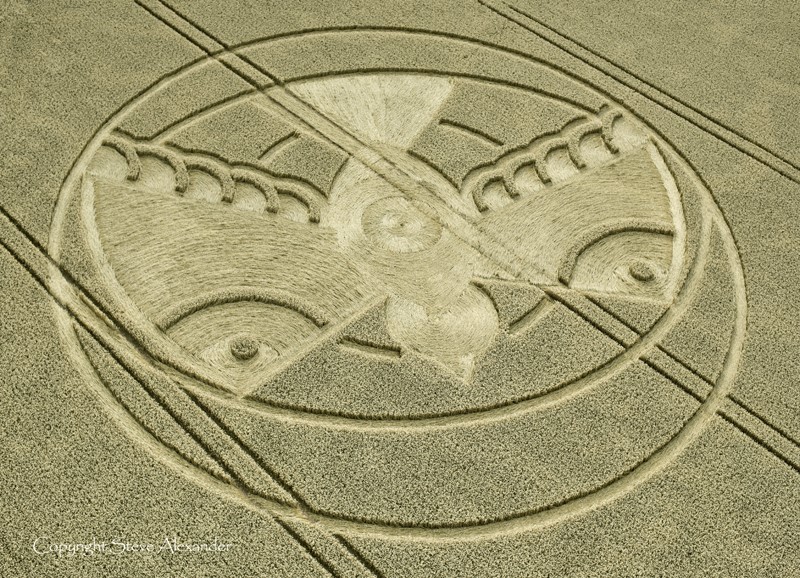 One of the most iconic formations of the 2015 season occurred on the 8th of the 8th. In fact there were two formations reported on that date, but the other is a story for another time.

Birds have often been portrayed by the crop circle phenomenon, some have been identified as swallows, others as a phoenix, one a Thunderbird.  In fact 2015 had seen the appearance of another bird, identified as a native American ‘Eagle Dancer’, at Uffcott Down on the 25th of July.

Symbolically in this context, birds are seen as otherworldly, ethereal, even numinous. They carry a spiritual connotation (like the spirit not bound too earth). More specifically, like the crop circles, they seem to haunt the space between worlds, messengers of the Gods, a conduit between Heaven and Earth. Like so many crop circle symbols, such as the squaring of the circle, or the marriage of the same, they address the connection between the Man and the Divine, or between this world and some other unseen realm.

Unlike the stupendously gigantic flock of swallows in East Field, Alton Barnes 2008, this little bird was far more humble, it measured approximately 180ft in diameter and was in a field of mature golden wheat at its perfected peak, ready for harvesting. When we flew over the circle, it was in one of the last remaining fields still standing in the area.

To many this bird was a Dove, it’s design very close to the classical Christian icon of the descending grace of God at the baptism of Christ. Leonardo Da Vinci was one of many classical painters that recreated the scene with the dove in the sky above Christ – Fig 1. 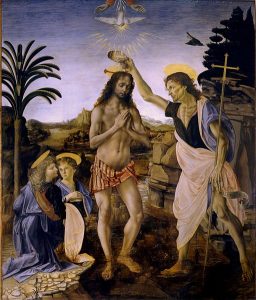 Fig 1. The Baptism of Christ by Leonardo Da Vinci

In fact as I contemplated the formation before writing this blog, the crop circle appeared to be a large circular communion wafer in the wheat/bread of the field, warmed and ripened by the sun (the glory of the Divine). I have to state clearly here that I do not attach any particular religious significance to this. I consider this imagery beyond religion. For me, the formation appeared as an invitation to partake in a deep, spiritual, soul-sharing.

The crop circle designs have drawn from all manner of iconography, both religious and non-religious, scientific (mathematical) and the deeply artistic. They are more like images from dreams – archetypal and non-contextualised, not to be taken literally.

Once again, the theme of sacred space, the marriage of the Earthy and the Spiritual was present, like an ever present echo the crop circles seem to be both a literal sacred space, a spiritualisation of matter, and an open invitation for us to take part, to be reminded and awakened to our own innate spirituality – and that this is a very pressing matter for humanity.

A human being stood inside a crop circle such as this is a deepening iteration, a sounding of the octave, a resonant echo of that which has the nature of both matter and spirit. Like the philosophers stone in which is matter perfected (spiritualised), there is something of this in the crop circle phenomenon itself, matter perfected, made resonant with the spiritual and with man himself.

I realise this is heady stuff, yet it is what lies at the core of the phenomenon. While some are attracted to the crop circles as proof of extraterrestrial life, I have almost always thought that there was much more at stake here than just that. And that should extraterrestrials be involved in, or influencing the crop circles somehow, they were not here to be a panacea to all the ills of man, but were urgently, yet gently offering a glimpse of what was going on in the psyche of mankind and urging restitution, resolution, evolution.

I have expressed the opinion, many times that the crop circles are simultaneously a catalyst for change and a symptom of the deep issues within the psyche of man that are struggling to rise up from the unconscious into the conscious, to be resolved and made manifest on the world. Like the alchemical motto ‘Solve et Coagula’, it seems to me that the many circulations of our collective psyche that lead to transformation are somehow expressed in the fields.

It would be fair to say here the dove is only one interpretation of this bird and that others have interpreted this as other species. However, generally speaking birds are spiritual messengers that connect heaven and earth.

This bird, curiously also had an eye at the apex of each wing, making it also very butterfly-esque. The butterfly has a connection to spirit too – the earthy transformed into the heavenly; the body become spirit. It is a symbol of transformation par excellence. Interestingly, the eye-spot in nature is used to misdirect or to warn, it signals danger, but often as a method of self protection. There is inherent danger in all transformation, even the spiritual. I found it fascinating that the invitation to partake in a deep, spirit, soul-sharing came with a warning too – but I was to gain another insight into the warning the eye-spots may carry as I drew the formation.

Finally and perhaps most intriguingly, the body of this bird was also a Vesica shape and contained

a hidden ‘third-eye’ woven into the crop. I have highlighted this in Fig.2. In this guise the eye is the inner eye, the eye that is connected to and sees other realms. 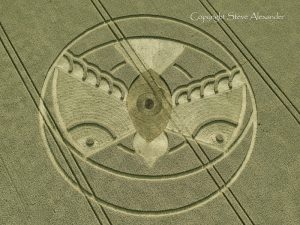 The ‘Hidden Third-Eye’ at the centre of the formation Fig. 2

When I sat down to draw this formation the first question that presented itself was which way up? The design could be either way with the bird descending or ascending. In the field there was nothing to suggest that there was a right or wrong orientation, and flying over the design it never looked the wrong way from any angle, so perhaps this little bird represents a process that both descends and ascends? As I had to choose an orientation for the purpose of drawing, being essentially an optimistic person, I decided to draw it ascending. It was very clear from the beginning that this formation was not symmetrical. So when I sat down to draw it, I decided to idealise the design to help me understand it. 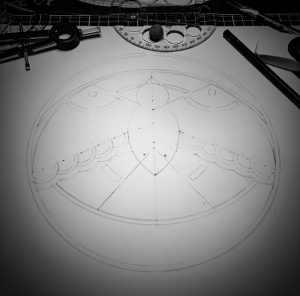 The entire design sits in a ring (circle), and there is a suggestion of a Vesica (in gold on the painting) at the centre of the formation, in which the bird sits. However, this is not a fully realised Vesica and the two arcs that should meet to form an almond shape do not, one arc appears larger than the other. 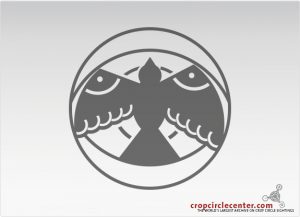 Fig. 3. Silhouette by Bertold Zugelder – taken directly from the photo. It shows the disparity in size between the two wings.

Looking at an exact silhouette of the formation (traced from over the photo), it is very clear to see that one wing is larger than the other – see Fig.3. This is a fascinating detail and evoked a connection to the hemispheres of the brain, with one seemingly more dominant than the other, or (as there was no way to know which was which – left or right) it might be better to describe the symbolism as an imbalance of the hemispheres. What triggered this connection was the eye-spot at the apex of each wing, which seemed to indicate or symbolise consciousness awareness, or just consciousness itself. So it might be said that the design implied an imbalance of consciousness. Perhaps this was the warning the eye-spots carried?

This humble and exquisite bird, carried a potent mix of symbols, shapes and geometry. I claim no particular expertise on crop circle interpretation, I cannot hand on heart say that crop circles have one particular meaning, or that they have any meaning. I can only speak of what they evoke with me and hope that this resonates with others or illuminates the formations for others. 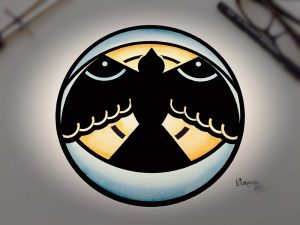 To me, this formation carried a message about an imbalance in human consciousness, one in which our inner knowing (while central to our wholeness as human beings) remains hidden, as does our connection and access to other realms and therefore to that other kind of knowing. It speaks of the opportunity we have at this time to a partake in a deep, spiritual, soul-sharing to discover/recover that innate part of ourselves – to rebalance our self and then to transform ourselves in to something new. Heaven knows this is what the world needs.

After I finished the drawing (Fig 4), I realised to my astonishment, that in idealising the geometry I had in fact re-balanced the hemispheres/consciousness by creating the wings in equal size. In essence I had quite unconsciously heeded the message of the formation and healed the imbalance. For a second, I was spell bound in the moment.

Needless to say working with the formation had a profound effect upon me and I found myself creating a new painting which I called ‘Vesica as Eye’ (Fig 5). To me this image represents the birth of a new consciousness – one can only hope… 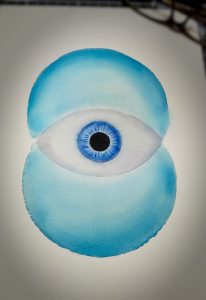 ‘Vesica as Eye’ by Karen Alexander. Inspired by the Hampton Lucy formation 2015