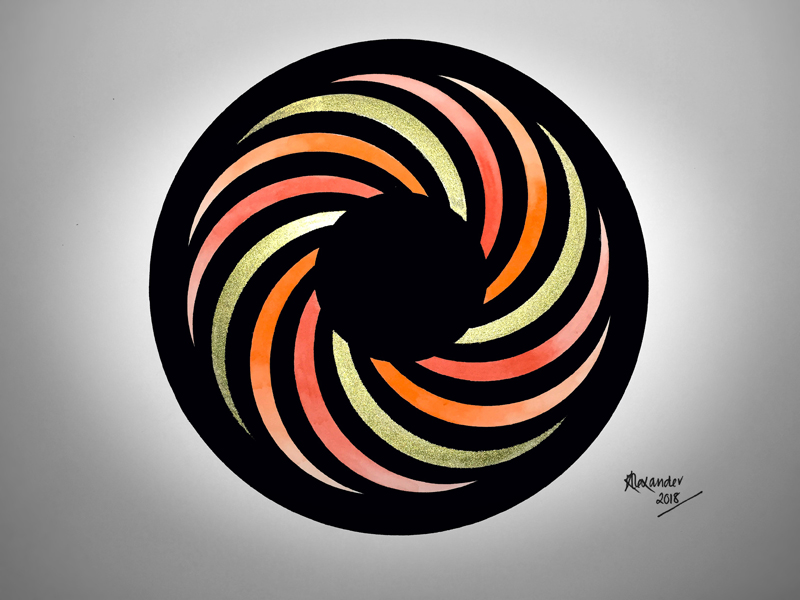 Above: Baggwilgraben, nr Bern, Switzerland | 17th June 2018 | wheat | Drawn and painted by Karen AlexanderThe 2018 crop circle season included several formations outside of the UK. Sometimes people forget that the crop circle phenomenon is a worldwide spectacle. There were several international circles of note during 2018, including circles in Switzerland, France, the Czech Republic, Brazil, Canada and Russia. I’m hoping to get the time to draw one or two over the winter months (as time allows) and when I do I’ll post them up in mini-blogs like this one… 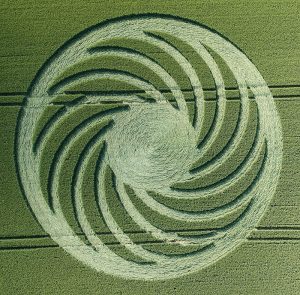 Detail
This circle at Baggwilgraben, nr Bern in Switzerland was reported earlier in the year on the 17th of June 2018. It appeared to be in a field of green wheat and looked to measure approx 150-180ft in diameter. It was a stunning whirling design, cookie-cutter crisp with a beautifully swirled centre. There have been several circles of high quality in Switzerland over the years and this one was one of the best.

Geometry
Like it’s later sibling at Niedrsherli, that would appear later in the year Read More, this formation was also essentially 12-fold in nature. On the drawing board the circle is divided by 24 to create all the points needed to draw the arcs (two points of curvature for each arc). The arcs are centred on the perimeter of the central flattened circle. A wide band is then dawn around the entire design, encompassing and containing the formation. I have often wondered if this containment is rather like a full stop, making each formation an entire statement or treatise. I have even wondered if each crop circle circle itself is like a living being, that the design somehow is alive. That’s sometimes how they feel at ground level. Geometry for me is a living thing, rather than a lifeless mathematical abstract. Of course, in reality, it is both, it has quantity as an abstract and a quality as it connects and evokes our unconscious and imagination. It is (too) often said that geometry is frozen music and this is true, but not just in its rations and proportions, but in the way it speaks to the spirit, eliciting an excitement of the senses. 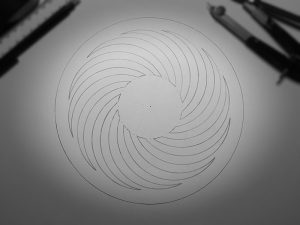 Twelve: Time and Measure
I wrote about some of the qualities of the number 12 when discussing the later Niedrsherli circle in my previous blog, and spoke of its ubiquity in civilisations where it is connected to time and measure. But why should this be so? What is it about 12 that makes it the perfect arbiter of these things? Thew answer lies in the length of a human breath. There is a wonderful chapter in Michael Schneider’s brilliant ‘A Beginners Guide to Constructing the Universe’ entitled ‘Breathing with the Cosmos’. I highly recommend both the book and chapter to those with an interest in both the quality of number and in this particular topic. In this wonderfully satisfying chapter Mr Schneider explains how the ancients encoded the numbers 12, 24, 66, 60 and 600 over and over again in to their constructions and culture, and in doing so made sure that their civilisations were breathing in time with the cosmos – a wonderful thought. 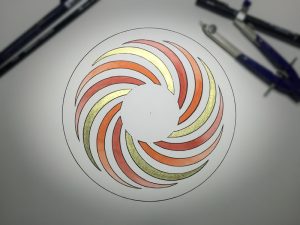 Unlike its later sibling in Niedrsherli, I could find no obvious Golden Section ratios and a square drawn around the inner swirls did not satisfactorily square the outer perimeter circle of the design – it was only a 90.1% match. Still this was a undoubtedly a circle of quality

Breathing with the Cosmos
Finally, as I contemplated this design, I was immediately reminded of the aperture of a camera, which contracts and expands. I smiled to myself, this circle was indeed a living thing, symbolic of breathing in and out – in time with the cosmos.

Thanks:
Dinu Maus for his kind permission to publish his photo in this blog
Steve Alexander for procurement