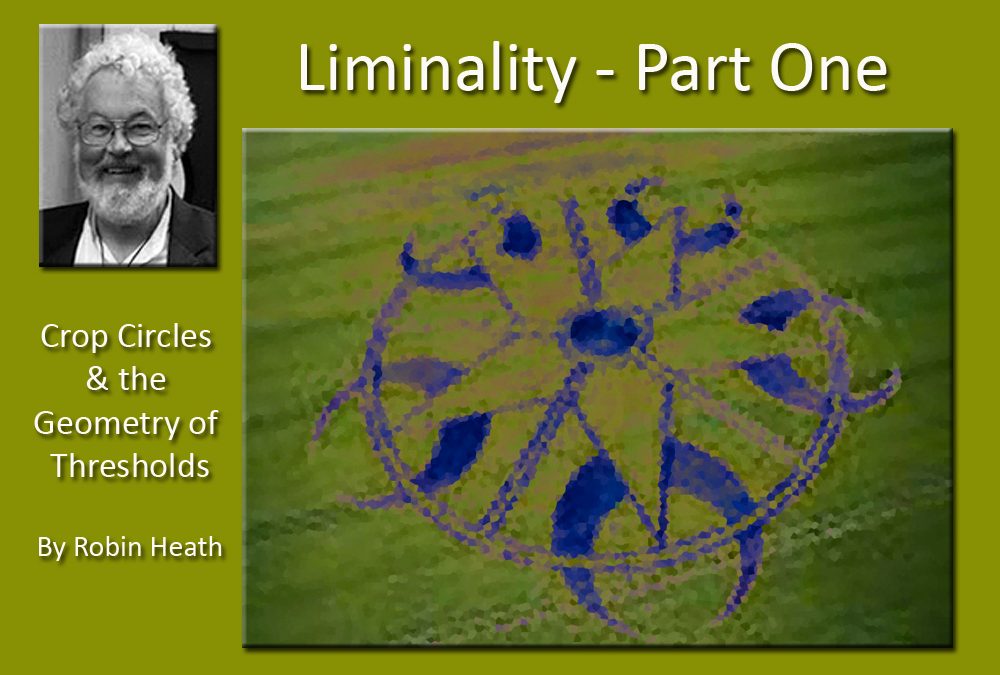 Crop Circles & the Geometry of Thresholds

We had the great pleasure of hearing Robin Heath deliver the keynote presentation at the Summer Crop Circle Lectures last year. It was one of the best lectures I’d heard him give in the long years I have known him; it was important, prescient and above all quite brilliant. He has very kindly given me permission to share that presentation with you and I will be posting Robin’s lecture notes and illustrations in a three part guest blog. I’d like to thank Robin for the opportunity to share his work on the Temporary Temples website – it’s a great honour!

Robin Heath is an unaffiliated researcher into megalithic and ancient sciences. He is author of several books on Stonehenge, two of which are on sale at the monument. For more information, there are two websites:www.skyandlandscape.com and www.megalithicscience.org Robin lives on a smallholding in coastal West Wales with his wife Trish, two cats and three theodolites.

Public interest in crop circles has always been discouraged by the media and many self-proclaimed ‘experts’, who in imitation of our political system have regularly fought vicious and sometimes personal campaigns against the views of those who have made a study of this mysterious phenomenon. Although, for a newcomer to this intriguing subject, it may appear that nobody agrees on anything with regard to the reason or purpose of the deluge of crop circles that seasonally locates itself in crop fields around the globe, there are some observable patterns in their type and locations. However, I do believe that we need to start asking some new questions about this and related phenomena.

Everyone can be in agreement that crop circles are first of all experienced as a geometrical phenomenon, as are stone circles, cathedral windows, and even mundane tasks such as surveying and navigation. But not everyone has realised that when approaching the threshold of a crop circle, created in a field of growing crop, its geometry is the last thing one experiences. Sideways on, one experiences separate expanses of lain crop, often seemingly chaotic. To see the whole picture one must go from flat-land to above-land, and this is the crucially important role of a pilot and a cameraman dedicated to taking stock photographs of crop circles. Their geometrical designs are transient, fleeting, sometimes mown down within hours of first having been reported. We are in debt to these people, not just because they scramble aircraft and helicopters to obtain these photographs, week on week, but because their photos have provided us with the evolving history of the crop circle phenomenon.

There is another reason to be grateful that this arduous and expensive task has been undertaken – their revealed geometry can be understood by humankind. Sacred, mundane and ritual geometry has been a constant feature of all world civilisations. The megalithic cultures, from earlier than 7000 years ago designed complex geometries into their stone rings, burial chambers and dolmen art. To cross the threshold of understanding this geometry, one must immerse oneself into the deeper levels of the subject. In other words, one needs to put some effort in, as one would to learn another language. An answer too easily obtained is often not remembered. The text books are still being written, but books by John Michell, Robert Lawlor, Keith Crichlow, John Martineau, Allen Brown, Michael Glickman, Nick Kollerstrom and several significant others can all be unreservedly recommended.

Crop circles are other things in addition to the pretty fabulous geometrical packaging. The order of significance of these ‘other’ things will depend on your level of paranoia and/or cynicism, your suspicion of the systems of world governments, your fear of the unknown – things that go bump in the night and your ability to appreciate completely original landscape art.

Because the crop circle phenomenon has always been first cousin to the UFO phenomenon for the majority of people, there is also the threat to national security to be considered, and whether or not the circles are made by none-human intelligences. That’s a really fun issue to toy with. Whatever your views on the subject, the phenomenon takes us on a journey into the unknown, the uncertain outcome and the twilight zone of life. It takes us to a doorway or portal, a threshold, the space between two worlds; a liminality.

1.Relating to a transitional or initial stage of a process.

2.Occupying a position at, or on both sides of, a boundary or threshold.

3.The state of the soul between its death and its rebirth

In anthropology, liminality is the state of ambiguity or disorientation that occurs in the middle of a ritual process. It is not knowing.

Then it leaves you on the doorstep, like an abandoned baby. Our world fails to include a manual for navigating this kind of experience. This lecture makes some attempts at supplying information that it is hoped might be useful. Anthropology and Psychology have laid down some useful foundations or frames of reference in the area of thresholds and liminality, an area filled with long words and acronyms.

One of these acronyms is a GST – a Global Social Threshold.

Crop circles tend to threaten the former and create the latter. Enough said!

But much better outcomes than these are available. The quotations that follow show themselves to be directly transferable to crop circles and describe various facets of liminality.

From the foreword of Operation Trojan Horse by John A Keel ( 1971, Dent)

4. The View from Jungian Psychology

5. The View from the Crop Circle Phenomenon

6. Psychology and the Crop Circle phenomenon

I apologise to Patrick for having abbreviated some of the above quotations.

This is quite a varied set of views, opinions and suggestions, but it is representative of the kind of material that anyone investigation the crop circle phenomenon will come across during their searchings. It will lead at some stage to facing and hopefully answering the following questions…

End of part one.

With thanks to Robin Heath for permission to use his material.

Would you like to come and meet Robin and hear him speak in person?

Robin will once again be speaking at our annual conference The Summer Crop Circle Lectures – August 3rd, 4th & 5th 2018. Click here for more details and to book.

Note: The crop circle used in the illustration for this blog appeared at Beckhampton, Wiltshire, UK on 13th July 2003. More images (including ground shots) can be seen in our 2003 Image Library here. Scroll through the pages to reach the 13th of July.