Detail: This formation was reported on the 1st of July and its in a field of green wheat. It measures approx 200ft in diameter.

Visiting: This crop circle has now been harvested. This formation was open to the public and there is a charge of £3 per person payable at the field side (under 16s are free).

Location: This crop circle is located beneath Danebury hillfort, between Nether Wallop and Stockbridge in Hampshire – see the Google Maps link for precise location.

Danebury Ring is an Iron-Age hillfort that is believed to date back to at least 500BC. It occupies a hill top that affords spectacular views over the surrounding landscape. There is a deep, double ditch around the top of the hill which is now partially covered with trees. This location is a Scheduled Ancient Monument, Site of Special Scientific Interest and a Nature Reserve. Its a wonderful location to visit, you can read more about the site here.

Flight/Flying: This is a difficult place to fly as it is located in the AAC (Army Aviation centre) Middle Wallop danger area. You will need permission to fly over this circle from their ATZ even with a drone. Middle Wallop is a very active helicopter training facility with aircraft coming in and out of the base regularly, often at relatively low level. Please also be aware that this circle is also located close to a main road and the area itself is popular with dog walkers and members of the public. Please be sensible and be safe.

History & Connections: Danebury Ring has seen several crop circles over the years. Most notably in 1998 the first seven-fold crop circle appeared here and in 2010 a huge 3-D cube design also appeared in this field. See the Geometry Gallery below for images. There was an interesting four-fold brooch found at Danebury by metal detectors – you see a short clip of some of their finds here. The brooch looks like a classic cross.

Design & Symbolism: This circle has an interesting geometry. I can tell you that it has an element of twelve and an element of four. I have heard that it has been reported elsewhere that there is something wrong with geometry of this formation, however, the geometry appears perfectly formed and symmetrical to me. Please see the Geometry Gallery below for more drawings, analysis and commentary. 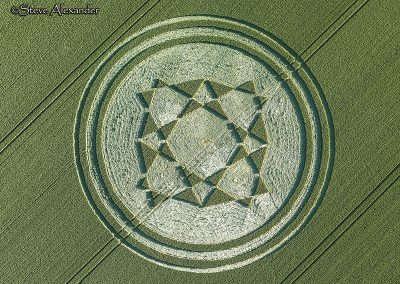 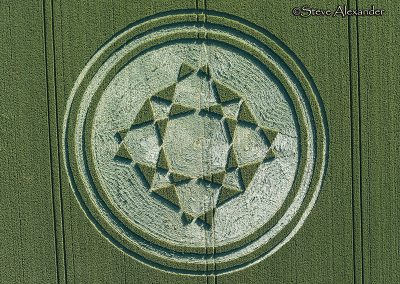 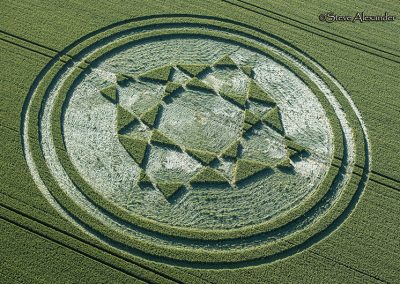 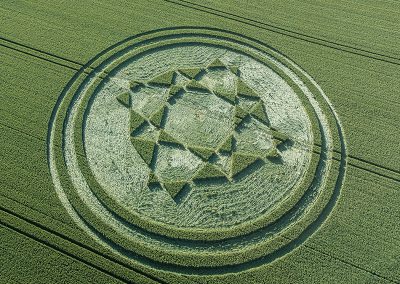 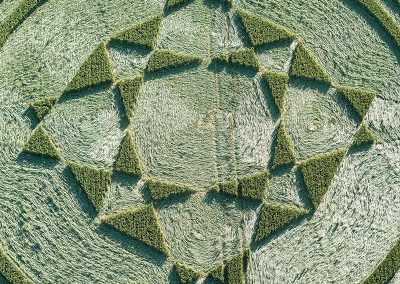 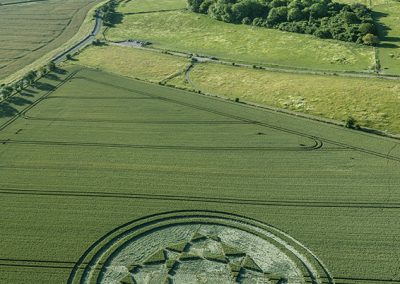 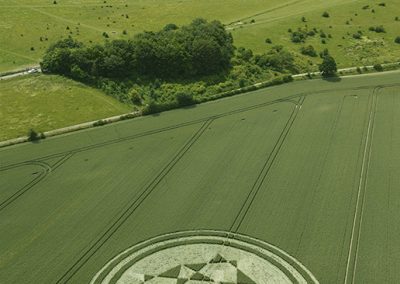 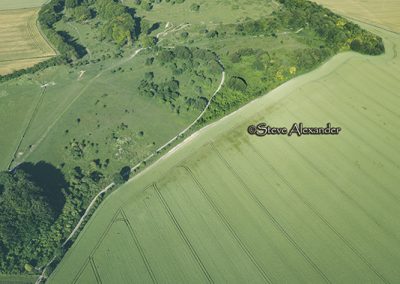 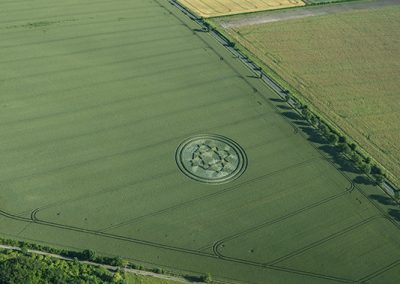 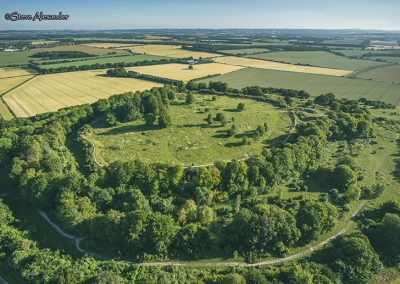 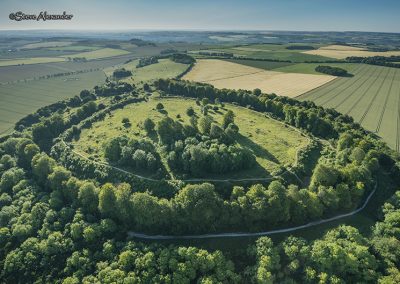 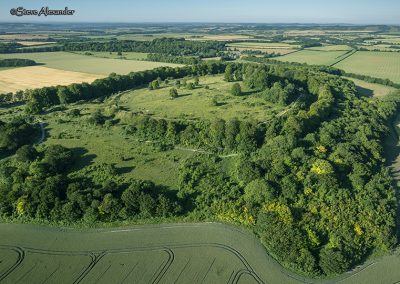 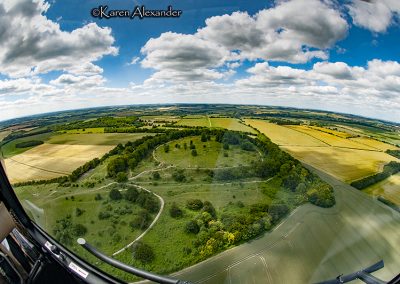 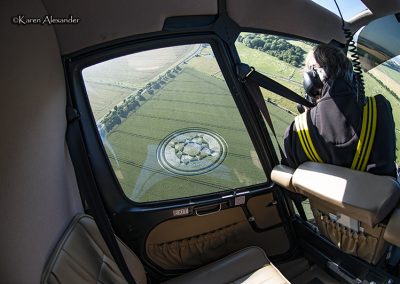 Note: There have been circles at Danebury Ring before. See the Gallery below for a selection of photos.

This crop circle was a pleasure to draw. Not just because of its pleasing design, but mostly because of its interesting geometry. I heard that the accuracy of the geometry of this formation had been questioned on the internet, but I can’t see why – the formation is perfectly symmetrical.

The geometry is unusual. Instead of being presented with classical polygons, or in this case regular stars, we have been presented with something a little more interesting. The 360 degrees of the circle is divided into twelve equal 30 degree segments. This can of course be used to then draw in a classical ‘Dodekagram’ (12-pointed star), but that isn’t what happens here. As you can see from Fig 1. in the gallery below – although lines are drawn between the twelve points, there is something a little more sophisticated going on.

You can try this for yourself by printing out an image of the overhead shot of this circle and drawing on top of it. That’s how most of my drawings start out. Of course photos are never exactly overhead, but you can get a good start on most formations using this method. Follow the lines of the pattern and soon the underlying framework reveals itself. As you can see from the images below, one must then go back and erase the redundant lines to leave the pattern fully realised.

The standing stars in this formation each have six points and are of a stretched, or stylised variety. We have seen this kind on inventiveness before with the circles most notably at the Etchilhampton in 2016, the Rollright Stones in 2017 and at Hackpen Hill in 2018.

As I was painting in the design, it reminded me of the sort of image you’d see in a children’s kaleidoscope, where mirrors are used to iterate the beads and create a never-ending, constantly changing pattern and symmetry. I wanted to spin the design to see what would happen next!

The main numbers presented here are 12, 6 and 4. Twelve is sometimes known as the ‘Frame Work’ number because it can underpin so many different number variations. It is connected with time and measure – 12 constellations of the Zodiac, 12 hours in the day, it also in the number of inches in a foot. Twelve is also woven in to many of our myths and cultures the twelve tribes of Israel and the twelve labours of Hercules. This weaving of number into our culture is a time-honoured way of ensuring that this precious canon of knowledge is passed on to future generations.

Six is one of the most utilised numbers in the crop circle canon and is traditionally the number of structure and order, think of the water molecule, ice, and snowflakes and also of crystals and carbon molecules. It also has a distinct and innate beauty to it, which makes it particularly attractive to the human eye.

Four is the number of the material realm, the stuff of matter. It is the number of classical elements (Earth, Air, Fire & Water). Throughout our history we have defined many quaternities to help us make sense of the world and ourselves – Jung’s classic ‘quaternity of the self’  (sensing, thinking, feeling and intuiting) is just one.

Finally, there are just a couple of other things to mention. One is the double square in the centre of this formation which I found interesting and secondly, I also found a couple of nice Phi ratios in this design. In no way is this any kind of litmus test, I just think any circle that contains Phi is all the more attractive for it and carries within it a spark of Divine Number.

It seemed to me that this formation was a kaleidoscope of numbers and ideas about space, time and the human mind. What makes it particularly precious, is the fact it has been opened to the public so that people can experience its architectural space. Being able to connect with this phenomenon on a physical level is so important and something of an increasing rarity. The openness of the farmer is something to be celebrated and to be very grateful for.

Text | Hand-drawn Images by Karen Alexander.
With special thanks to Peter van den Burg for his additional diagrams and analyses below. You can see more of his great work on his Facebook page Geometry of the crop circles. 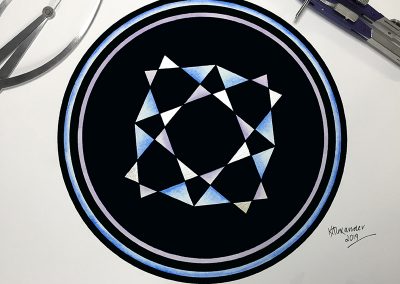 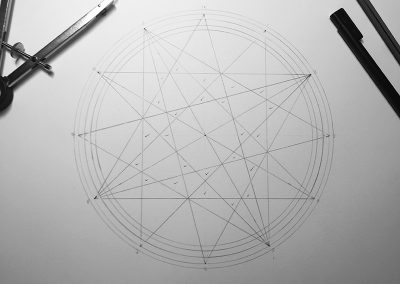 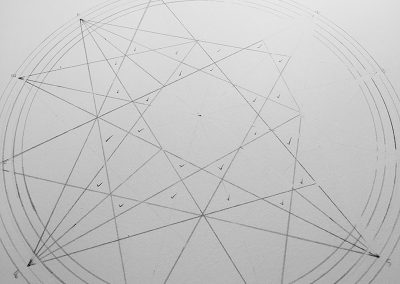 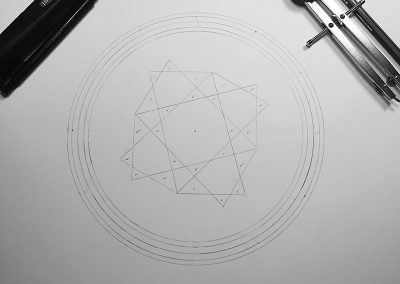 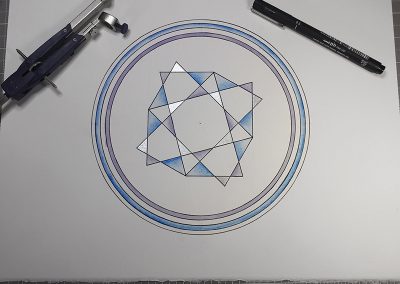 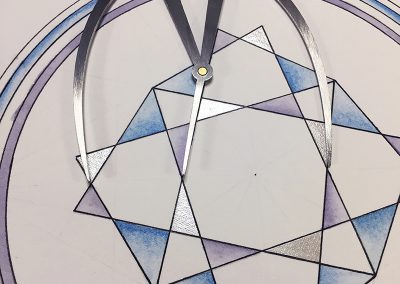 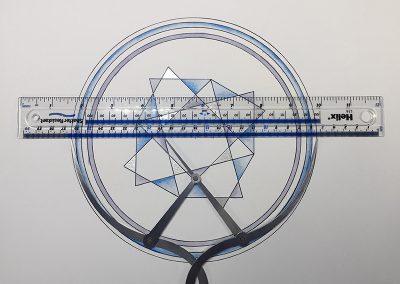 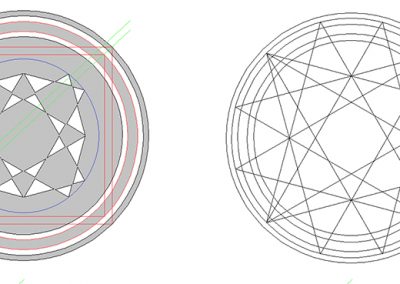 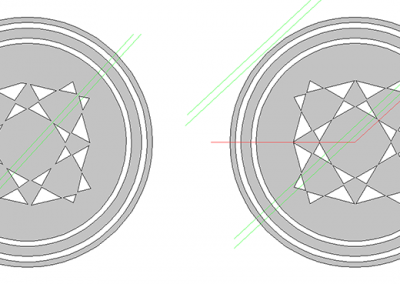 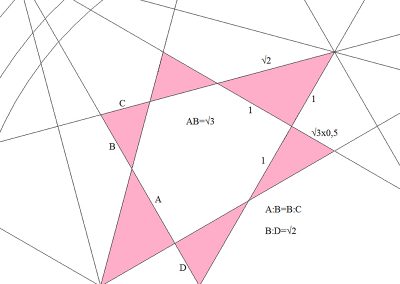 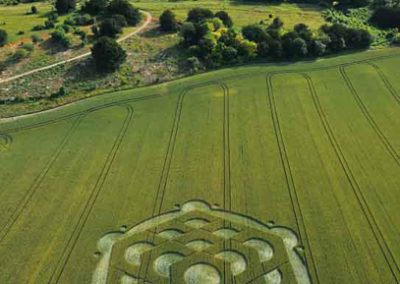 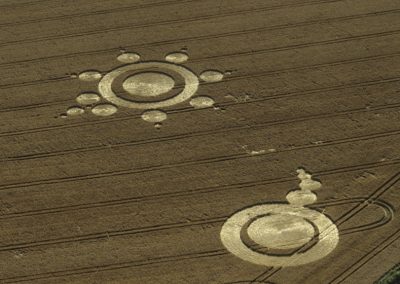 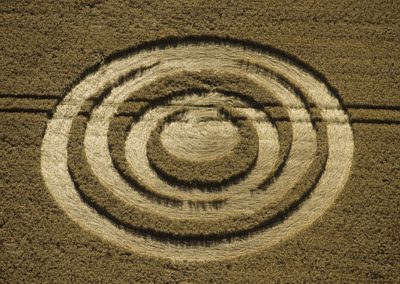 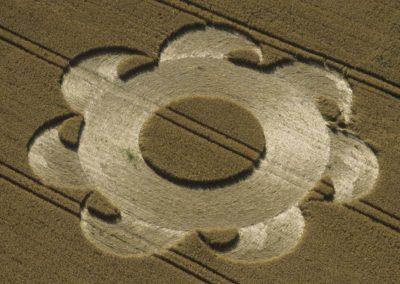 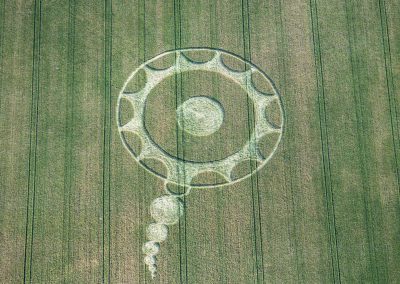