Detail & Location: This circle was reported on the 4th of August and was in a field of golden wheat. It measures approximately 200ft in diameter. The circle is close to Nun’s Walk (road) near the village of Tufton, close to Whitchurch in Hampshire.

Visiting: This crop circle has now been harvested. The field was harvested within 24 hours of the circle being reported, so is sadly no longer with us.

Special Thanks: Sadly we missed this circle as it was cut so soon after it was reported and it occurred on the weekend of our annual conference! We are therefore very grateful to Hampshire Flyer for allowing us to use his photographs on this page. It is very much appreciated.

History & Connections: There have been early circles in nearby Long Parish (1996) and Litchfield (1981 & 82). This circle isn’t that far from the earlier circle at Barton Stacey this summer. Once again this is a new circle in old country – as far as the phenomenon is concerned. Tufton is known for its beautiful ‘All Hallows’ church and nearby Whitchurch for its early silk mill. 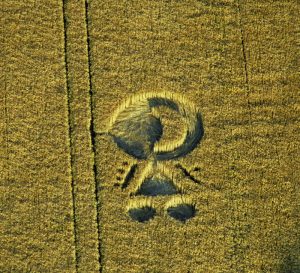 Litchfield 1996 – the cutest crop circle ever?

The afore mentioned circle at Litchfield in 1996 has to win the prize for the cutest crop circle ever!

Design & Symbolism: While at first glance this formation may seem like a classic six-fold, there is much more going on here than meets the eye. See our Geometry Gallery below for a full write-up and drawings. 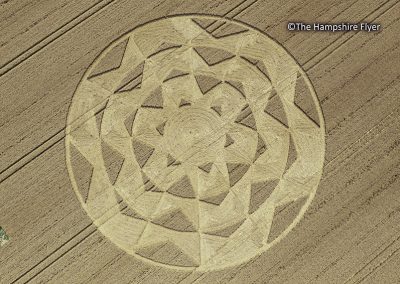 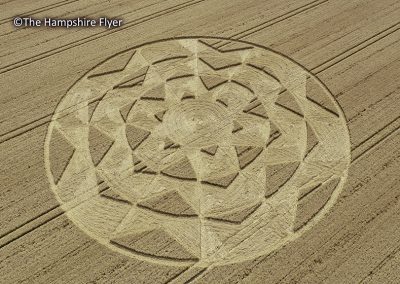 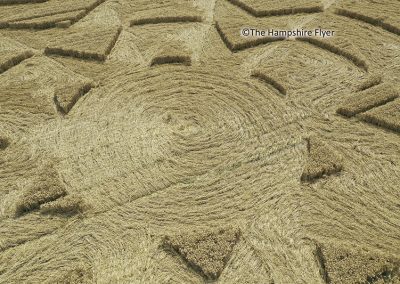 The formation that appeared at Tufton in Hampshire was an abject lesson in taking time to ‘really look’ at the crop circles, especially before starting to draw them. At first glance this formation appears to be a pattern built on an interaction between hexagons and circles, but actually, it’s nothing of the kind. In fact, would it surprise you if I told you that there are no hexagons in this circle at all? Well.. read on…

It looks so obvious doesn’t it? There appear to be two hexagons inside this circle, such is their visual allure, they are almost the first thing you see when looking at this formation. The crop circle geometer Peter van de Burg (Geometry of the Crop Circles – Facebook page) and I had quite a time with this formation. But the clues to the origin of the pattern were there all along in the photographs and in the lay of the crop itself.

There are times when crop circle geometry can be quite complex, but it is not the complexity of the geometry that makes the circles so special, for me it is the elegance, harmony and beauty with which they are woven together that makes them so fascinating and so satisfying. It is also their ingenuity; the simple pleasure derived from drawing the circles is following the imaginative and creative ways the circles are designed.

Because the crop circle phenomenon marries both the physical and the abstract (or non-physical), a good way to approach drawing the circles is to look at the photographs. Sometimes it’s easy to overlook this when faced with recognisable geometric forms – but it always pays to check if there is anything in the fabric of the circle itself that can aid our recreations on paper. 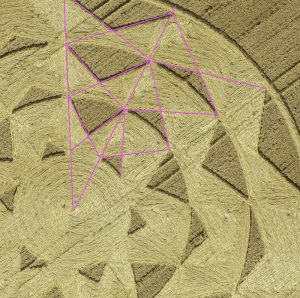 In this case, it is clear from the photos that the circle is divided into at least twelve segments (or pie slices). You can see these slices very clearly in the laid crop – so this is the first clue. In the photo (left) I have drawn some lines on top of the formation to help show you what is happening.

From the centre circle – moving outward toward the circle perimeter – we can see there are 3 concentric circles (then the perimeter of the circle itself).

2nd Clue: 3 concentric rings between the centre circle and the perimeter of the formation.

Finally, we can just about see that there are a whole series of ‘Xs’ in the laid crop, it is these ‘Xs’ that create the triangular shapes (and give them two straight sides each) and it’s the concentric rings that give them their one rounded side.

Taken all together we can make a framework from which we can build this design. See image number 2 in the gallery below for the full framework, then follow the pictures to see the pattern emerge.

Notes: The centre circle, and the first two concentric rings also have close partners – see the drawings below for details. Secondly, in my drawing I further divided the 12 pie segments into 2, to create 24 divisions. This helped keep the construction accurate and balanced as I drew it, but these divisions were not visible in the field.

As you will see in the picture gallery below, there are no hexagons drawn at all to make this design, they are a visual illusion. Like one-point projection, or isometric projection, they give the illusion of something, but are not the thing themselves.

From a philosophical point of view this is very interesting. Both isometric and one-point projection have been used in crop circle design, and there have been other similar kinds of ‘visual illusions’, that create seeming depth (the worm-holes or tunnel formations for instance), so the idea of things not being what they seem, of hidden dimensions, or an unseen unifying point of emanation have all been part of the crop circle language (or message) for many years. These ‘illusions’ seem to speak of a unifying connected other realm  – a dual-aspect (standing and flattened crop) Monism if you will.

Lose your illusions! – the crop circles seem to be saying, or at least be willing to see beyond them.

For the eternally curious, the framework for this formation is very much like the circle that appeared at Etchilhampton in 2015. You can read more in my blog ‘Blocks to Understanding’ and see my drawings of that circle for comparison.

There were some nice Phi proportions going on on this circle. See the picture gallery below for pictures.

Finally, Peter van den Burg has done some analysis on this circle looking at musical ratios – see his drawings in the gallery below.

Text | Hand-drawn Images by Karen Alexander.
Photography of the Tufton crop circle  – Hampshire Flyer.
Photo procurement and advice: Steve Alexander.
With special thanks to Peter van de Burg for his thoughts, perspectives and analysis. You can see more of his great work on his Facebook page Geometry of the crop circles. 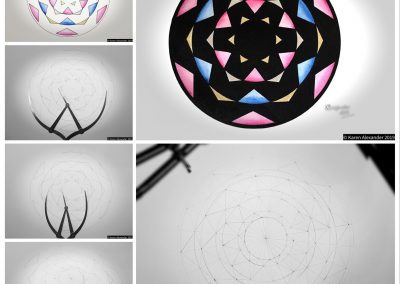 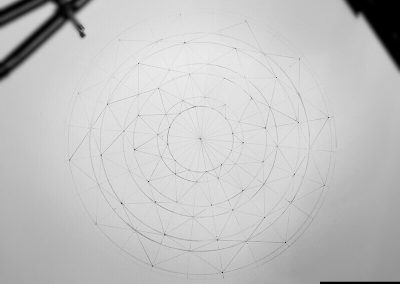 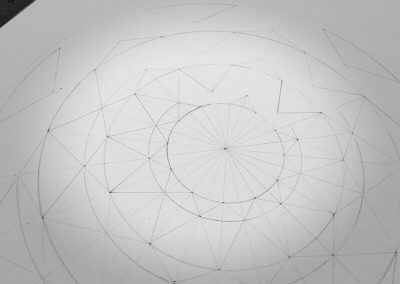 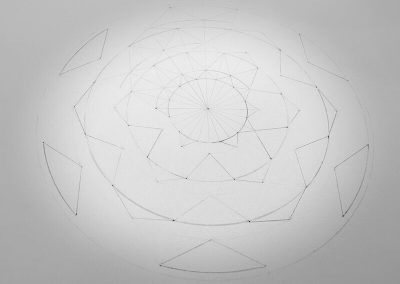 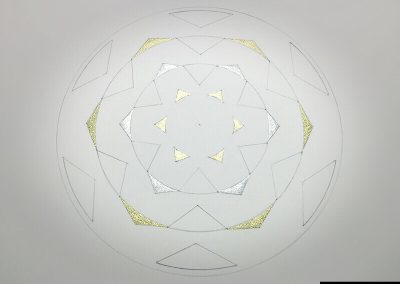 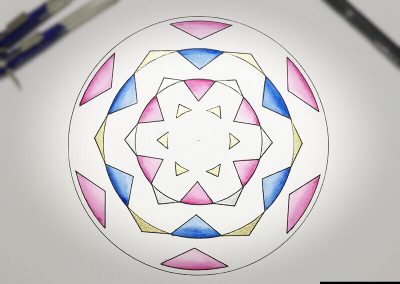 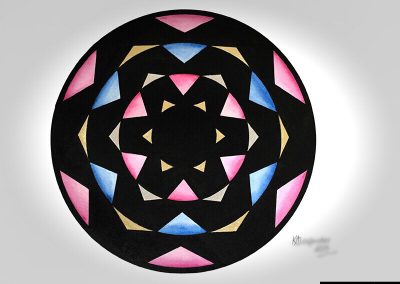 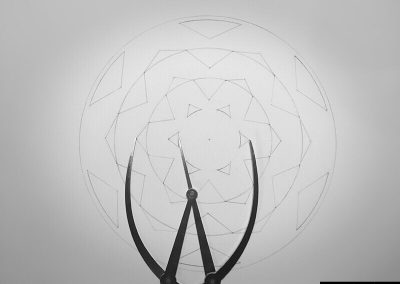 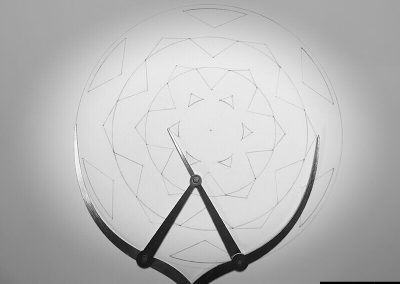 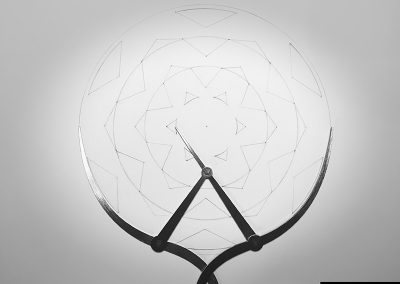 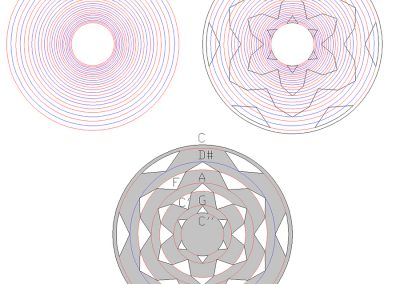 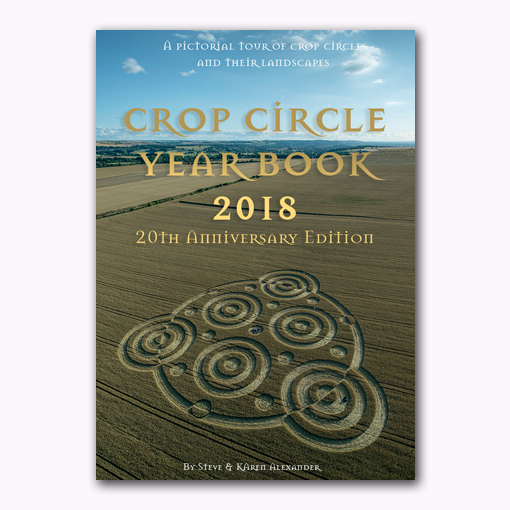