(Windwhistle Lane off the A36)

Detail: This circle was reported on the 23rd of July and is in a field of golden wheat. It measures approximately 180ft in diameter.

Is it, or isn’t it? There appears to have been some confusion in regards to whether or not this circle had been cut. It was reported on the 24th of July that this circle had been cut out of the field. However, by later in the day it was clear that the circle was in fact still there and had perhaps been confused with a similar looking circle (from earlier) which had indeed been cut. We’d like to thank all our crop circle colleagues who kept in touch and helped to clarify the status of the circle before we flew. With special thanks to Mark Fussell at Crop Circle Connector. As of the evening of the 24th of July the circle was still intact in the field.

Location: The formation is located in a field on Windwhistle Lane off the A36 close to Alderbury. (see Google Maps link for exact location) and is also overlooked by the very picturesque Pepperbox Hill. We could clearly see ‘Erye’s Folly’, or ‘The Pepperbox’ as it’s also known when we flew over the circle. Pepperbox Hill is a place of outstanding natural beauty and is famed for its rare wildflowers and butteries. The pretty Folly is on a natural viewing spot with spectacular views across the landscape. Follow the link below to the National trust for more details and information about how to get there.

There also seemed to be a marking in the field (seen through the crop), roughly square with rounded edges. This could be an archeological artefact of some kind – but as of time of writing I have not yet been able to access any information to confirm what it is.

A wonderful place for a walk, enjoy the wildflowers and wonderful views

Commanding the high point on the chalk ridge south-east of Salisbury, Pepperbox Hill is topped by an early example of a brick folly. Thought to have been built by Giles Eyre of Brickworth House, it may have served as a viewpoint for ladies following the hunt, a haunt for highwaymen and a lookout post for the home guard.
Surrounding the folly is a diverse habitat, produced by the scrub-grassland mosaic, supporting several rare or uncommon species including orchids, juniper and yew woodland.
The adjacent chalk downland is a significant site in Wiltshire for rare butterfly species, including the duke of burgundy.

History & Connections: Pepperbox Hill is an old haunt for the circle-makers, with two formations appearing in 1990 and three in 1991
Images and information about these early circles can be found in the following publications:
The Latest Evidence by Pat Delgado & Colin Andrews 1991 (Pages 62-63)
Crop Circles: Conclusive Evidence by Pat Delgado 1992 (pages 16-18)

Design & Symbolism: This crop circle is a six-armed design based on linked circles. Its wavy lines give it a natural feel, rather than a strictly geometric construction – although the underlying geometry will most probably show that it has a logical geometric blueprint. More of this when I have drawn it.

As six is the most ubiquitous number used in the geometry of the circles, you will have no doubt heard me describe in some detail the properties, function and characteristics of six-ness many times! So I won’t repeat myself here. However, it is an interesting coincidence to note that the Folly at Pepperbox Hill is itself hexagonal in design.

See our Geometry Gallery below for more analysis as we have it. 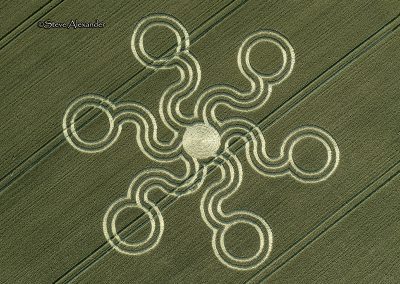 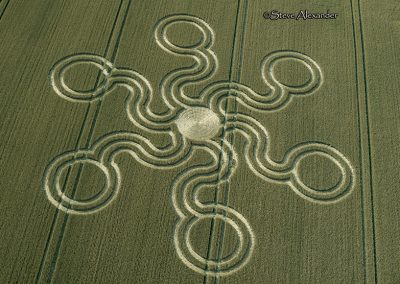 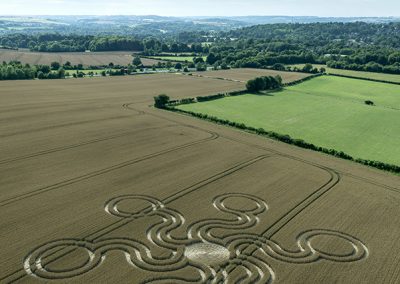 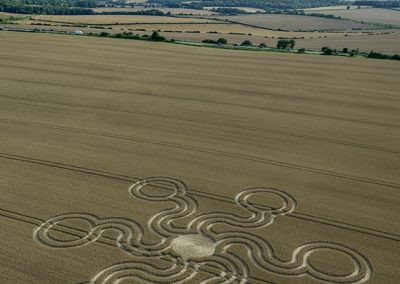 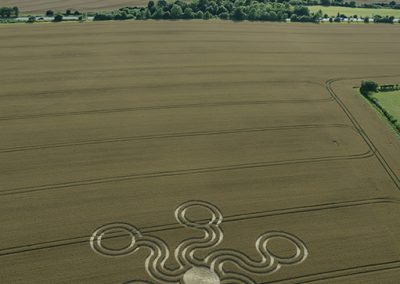 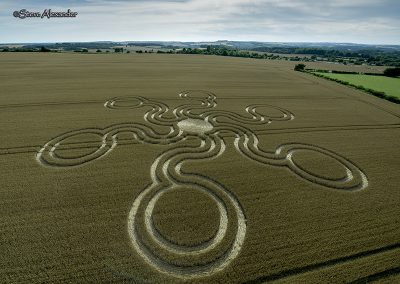 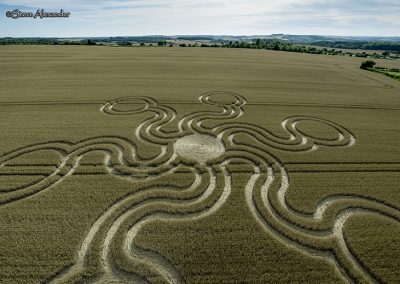 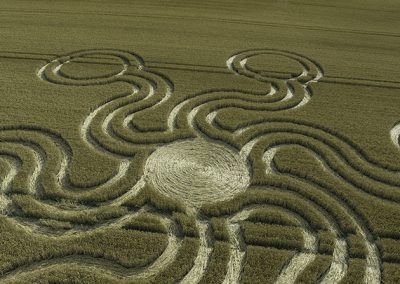 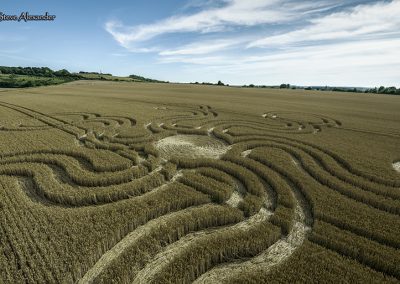 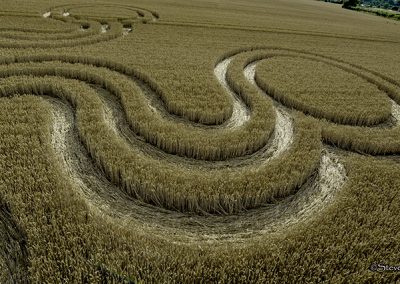 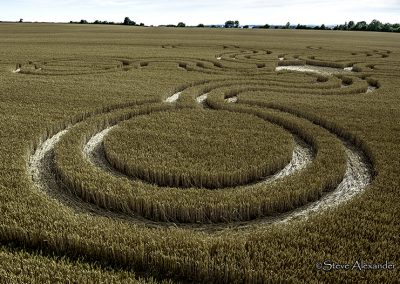 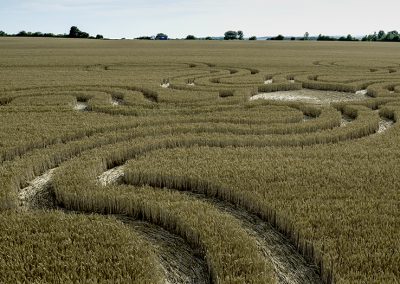 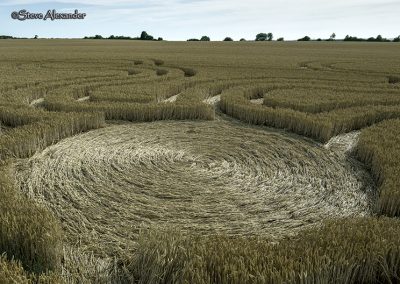 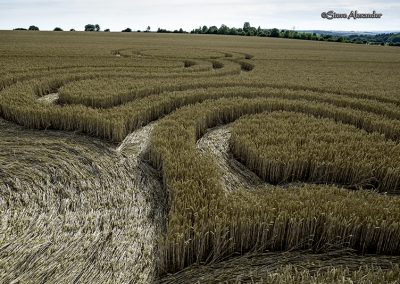 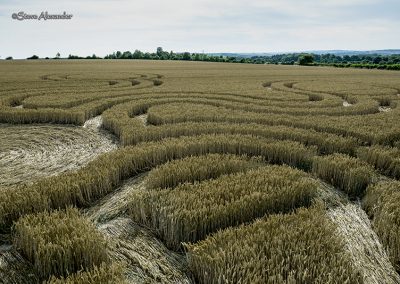 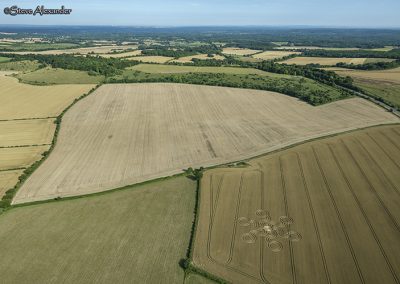 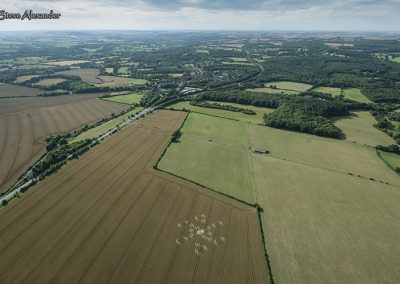 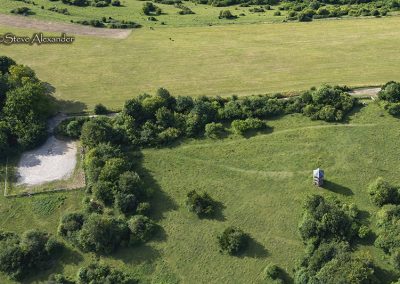 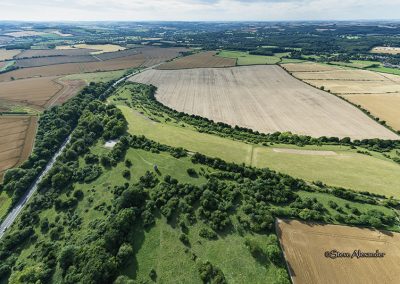 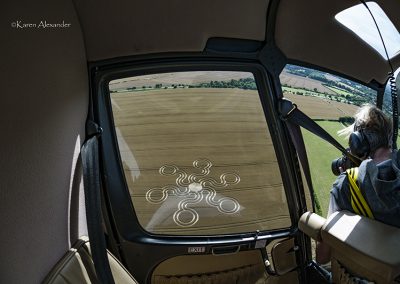 While the geometry of this circle is not (in some ways) complex, its transference from the field onto the page was quite a long and painstaking process that required a lot of concentration. Consequently, this painting took quite a few days to complete. Even having said this, I’m not 100% happy with its accuracy, but I am happy that the recreation method is the correct one. Any inaccuracy would come from my lack of razor-sharp precision as a geometer and working at a relatively small scale, rather than an incorrect understanding of the design. The smaller the circle, the harder it is to draw with a compass.

The design itself is six-fold in nature. Six wavy-arms spiral out from the centre to create this very attractive pattern. Of immediate interest is the the fact that there are no marks at the centre of the standing circles at the end of each arm. How does one create a circle with out one? Each arm can then be split into three and is made-up from three sets of concentric rings – see images in the gallery below. The is a small circle with five equally spaced circles around it, making six circles altogether – yet another expression of six-ness throughout the design. The arms are created by using opposing sets of semicircles that connect to one-another 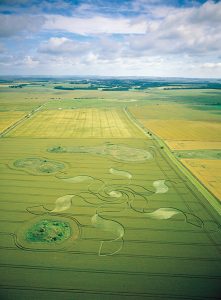 The Ribbons at Normanton Down near Stonehenge in 2002

This circle reminded me of the Ribbons at Stonehenge in 2002 (see photo). In the Stonehenge circle, is arms are also divided into three sections with semicircles at work to create the emanation and flow of the ribbons from the centre of the crop circle. The geometry is slightly different, but it’s the same basic idea at play.

Because I worked on this drawing/painting for over a week, I found myself having this design in the back of my mind quite a lot. So I was not entirely surprised when I woke up one morning having dreamt about it. The dream came the night after I had completed the pencil outline of the design – so it was complete on the page, if not yet painted.

The dream (as my dreams often are), had little narrative, but rather was like a short film clip which emphasised the visual rather than a storyline. The dream took place at night and I was floating above a crop field that was simultaneously a huge pool of water – a bright full-moon lit the sky above. As I watched, nineteen drops of liquid fell from the moon and landed on the surface of the pool, these droplets then created ripples in the water which formed the pattern of this crop circle in the field. The water (pool) faded away leaving just the circle in the field under the watchful eye of the full moon.

Clearly this image had made its way into my unconscious as I had drawn it. I had however, not associated the number nineteen with this formation until I had had the dream. Going back to the drawing I found that there were indeed nineteen centres of curvature (or emanation) in this formation. See Fig 1.

Fig 1. The Nineteen Centres of Emanation

Nineteen is is a lunar number. The METONIC CYCLE is the Moon’s 19 year cycle whereby the Moon returns to exactly the same place (at the same longitude and against the same constellation) in the sky with the same phase. I knew this before the dream, but my dream had woven all these things together in an image that imaginatively conveyed this information in a striking, arresting and beautiful way.

To be clear, I’m not saying that this crop circle was a code about the already known metonic cycle – what would be the point of that? But I am, as always, fascinated about the link between the crop circle images and their ability to directly effect the unconscious in such a powerful way.

What it does suggest is that there is a very deep link between human consciousness and the unfolding of reality. Geometry itself is part of the link. We seem to be intimately connected to dreaming this reality into being according to the law of number, but not just the quantity of number, but also it’s innate qualities. Is it really just blind chance that geometrical coincidence can be found in every strata of matter and in the mind too? I think not.

Post Script: Mysterious emanations from the Moon are featured on this tarot card from the Rider-Waite-Smith Tarot (printed in 1910). The card is connected with dreams and the unconscious, also the hidden and esoteric. Here the emanations are the alchemical ‘dew’ of heaven bestowed upon earth. They are the waters of transformation. The Moon is card number 18 (3 x 6), whereas card 19 is The Sun. The crop circle while connected to the Moon via the number nineteen, also looks rather like an image of the sun. 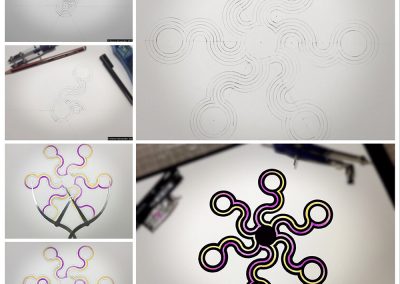 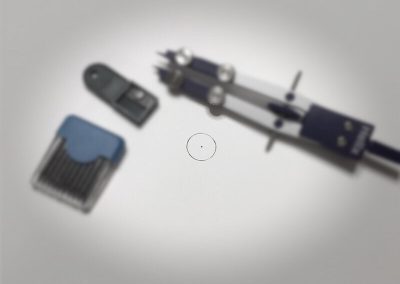 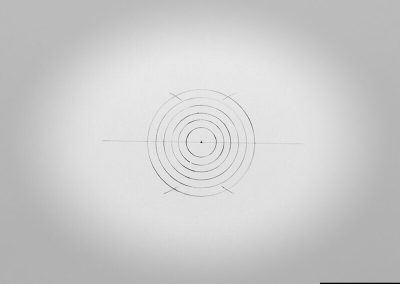 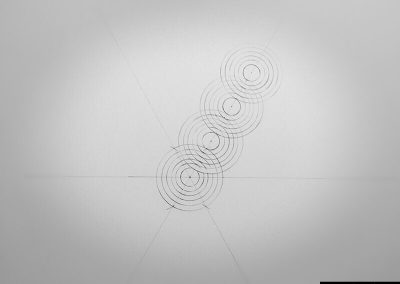 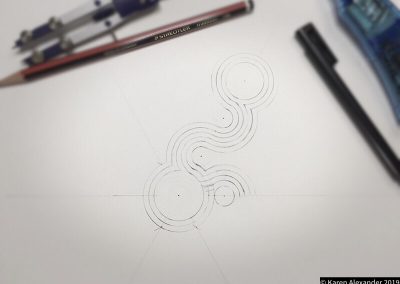 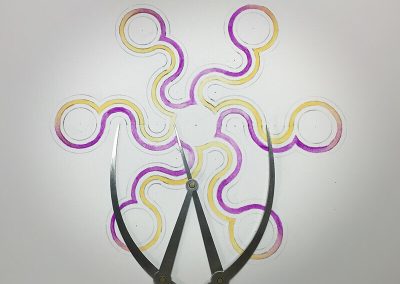 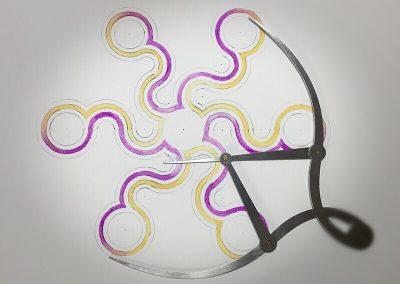 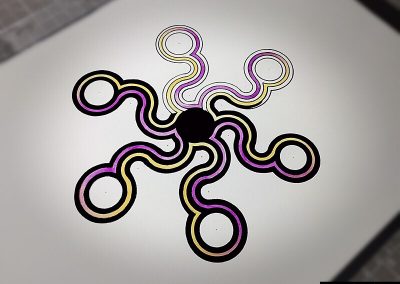