Detail: This circle was reported to us on the 11th of June 2019, although it is highly unlikely this is the actual date it appeared. The formation was already showing some signs of wear and recovery when we flew over it.

Once again, this area of Hampshire has been (historically) a regular site for crop circles in the early years (1970s/1980s). The crop type is young, green barley. This circle is fairly large and measures around 250ft in diameter.

Location: This circle is visible from the nearby road and is close to several houses. Owslebury has had circles before, notably back in the 1990s.

Flight: The flight was very difficult. The weather was atrocious over nearby Winchester and we flew through heavy rain and and low cloud to reach the circle. We would never normally fly in such conditions, but with there being no let up in the forecast for another week at least, we decided we would try to get some shots before the circle grew out completely. It has to be said that the weather on the south coast when we left home was lovely, sun-shining and warm, but as soon as we travelled a few miles inland there was a line of cloud after which it was blanket cloud and rain. The flight was further complicated because the circle lies in Southampton Airport airspace for which you need permission to enter.

Design & Symbolism: This formation was a very nice eight-fold design. A series of semi-circles in the centre make a flower-like pattern. Eight is the number of periodical renewal, as in the musical scale, where when we sound the octave (oct-8) we find ourselves back at the beginning of the scale, but on a different level – reaching beyond our current level. It is also a cyclical number that has connections to cycles of time and the movement of the planets – this may have to do with its membership of the Fibonacci sequence of numbers. Eight, along with its predecessor five and its successor thirteen are the three most common Fibonacci numbers found in the natural world. Eight is a number we do see in crop circle design, but is not as common as say, six, twelve or even five.

It will make a great design to draw! See the Geometry Gallery below for updates as soon as we have them! 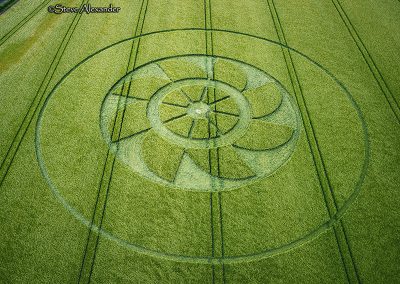 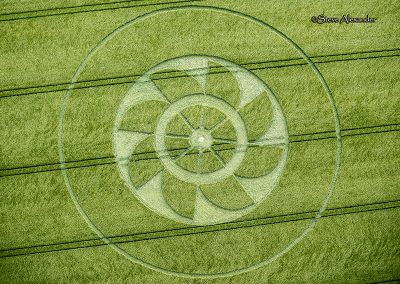 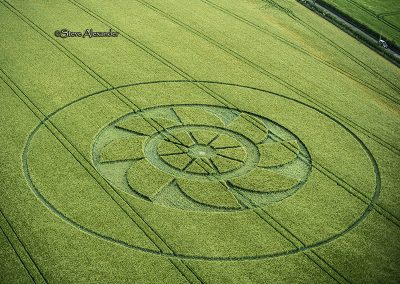 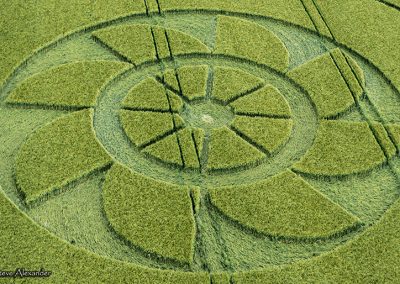 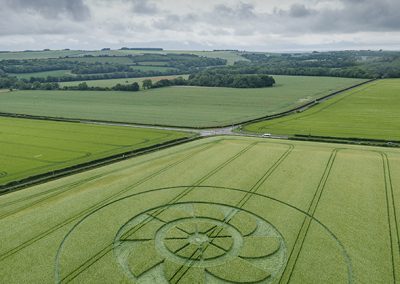 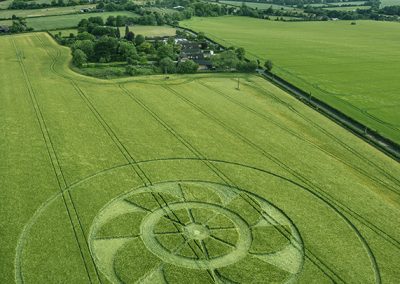 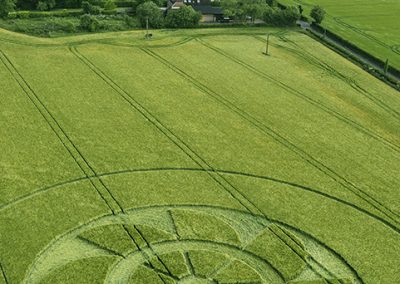 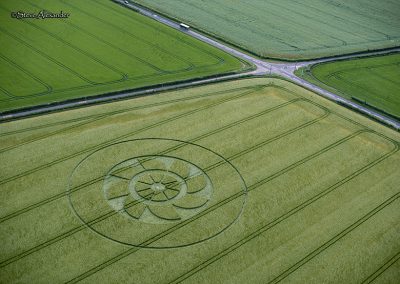 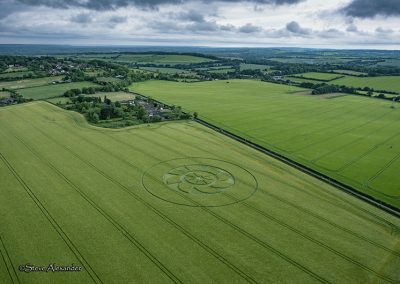 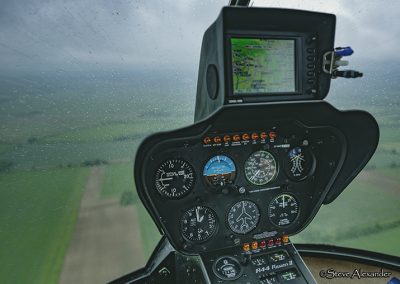 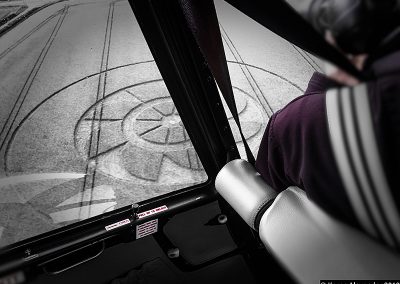 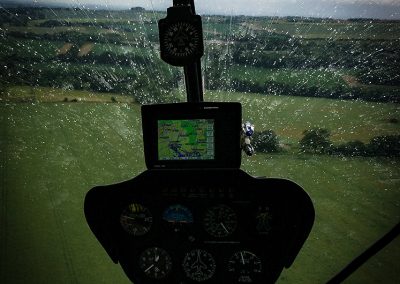 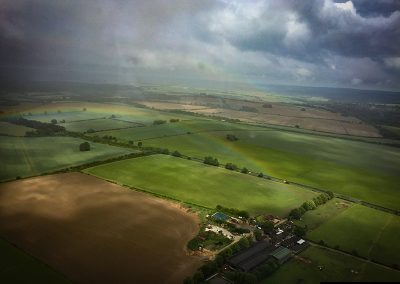 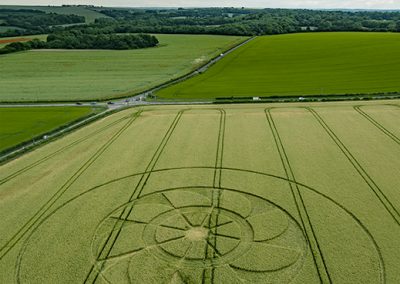 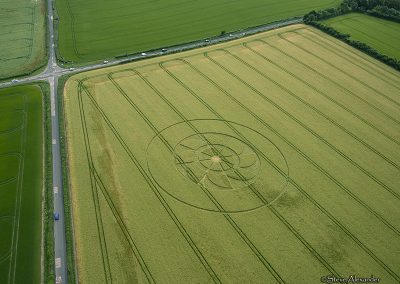 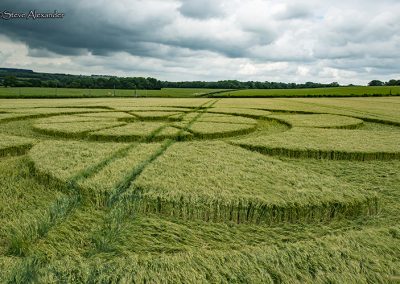 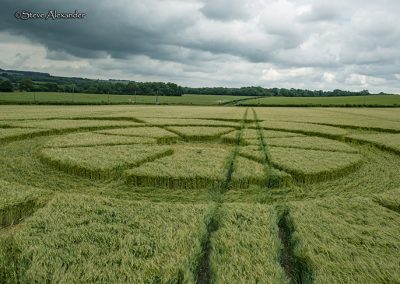 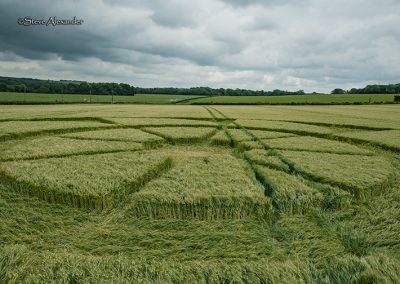 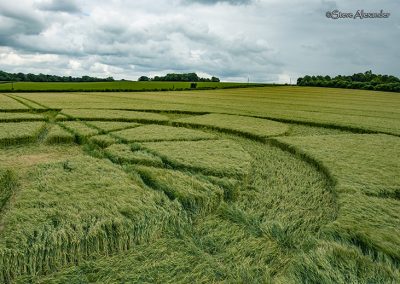 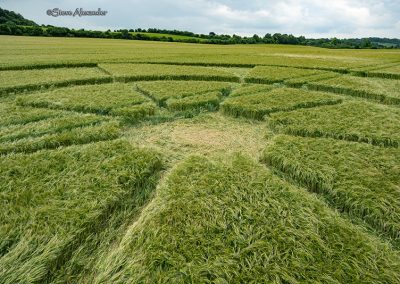 First things first. A word about the pronunciation of Owslebury. According to the parish website…

These things are important and now you know! It apparently has something to do with a bird called an Ousel, a black bird with a white crescent on its chest. For the eternally curious you can read more here.

I have heard this formation referred to as the ‘Lemon Segments’ formation because of the arrangements of semi circles in its centre. But I have a strong objection to this characterisation which I’ll explain later.

This circle is undoubtedly eight-fold. The eight segments in the centre of this formation show that the circle has been divided by eight to create the pattern. There is a central circle and broad ring, then a large narrow ring around the entire design.

This was a very attractive design, with the detail of design held in the centre and an encompassing ring – like an aura containing it. Encompassing is such a nice word. En-compassing – it feels like it sounds when you draw something like this design – you encompass the design when you sweep a circle around it with your compass.

Eight is the number if periodic renewal, some go as far as to say it is the number of evolution, or even salvation. As I have written many times on this website, this is because of the numbers connection with the musical scale. There are seven notes in the musical scale, the eighth sounds the octave, we simultaneously go back to the same note, but in a new scale.

Eight is the first cubic number (after one) and, as it has the most divisors in the decad (numbers one to ten), it is seen by many as resonant and congenial, mixing easily with more numbers the decad than any other. It’s little wonder we find eight-fold designs so appealing.

As a Mandala eight-fold designs are popular as they are a doubling of four and allow many systems of 4-fold correspondences to be transposed upon them.

With its eight-fold geometry this circle could be seen as resonant, harmonious, welcoming, congenial and an invitation towards an evolution of some kind.

It does however have a hidden proportion in its design. Like so many crop circles over the years, some do contain hidden numbers in their proportions. In this design there is an interesting proportion between the inner circle (which contain the segments) and the outer perimeter of the entire formation.

The proportion (relationship between their respective radii) allows for an obtuse heptagram to fit precisely between the two – see drawing in the gallery below. Geometrically speaking, there are two heptagrams possible, one acute, one obtuse, sometimes affectionately referred to as the thin seven and the fat seven – again see the image in the gallery below. The first joins every second point to create a seven pointed star, the second, every third point.

In contrast to the congenial (some might even say promiscuous) eight, seven is known as the virginal number. It does not play well with other numbers. Its connection to the seven notes in the musical scale, the seven colours of the light spectrum are often quoted, as is the poetic John Michell aphorism that links seven with the “divine feminine, spirit, revelation and what lies beyond the veil.”

Unlike other regular polygons, seven (the heptagon) cannot be constructed (or born) from the vaginal vesica created by the Division of Unity. Like the great Goddess Athena it is self-made, unborn, virginal. However, its connection to the ethereal and spiritual mark it out as a lucky, even spiritual number, the mystical number 777 is considered the three-fold perfection of unity.

The marriage of 8 and 7 in this formation perhaps mark the invitation and welcome to an evolution of some type (8) as a largely spiritual affair (7). I have often contemplated the idea of the ‘lonely circle, isolated in the field, a part of the world, yet not quite – but pregnant with spiritual potential.

Finally, the sticky and rather sour question of the lemon segments analogy. Of course I can see why people might make the connection – but as every geometer knows, the geometry of citrus fruit is ten-fold, not eight 😉

Text | Hand-drawn Images | Heptagram illustration by Karen Alexander.
With special thanks to Peter van den Burg for his additional diagrams and analyses below. You can see more of his work on his Facebook page Geometry of the crop circles. 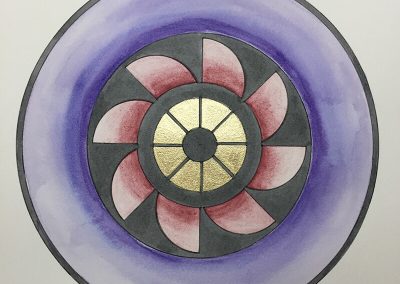 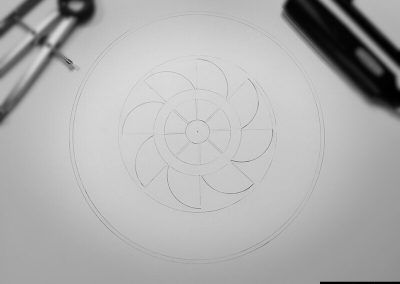 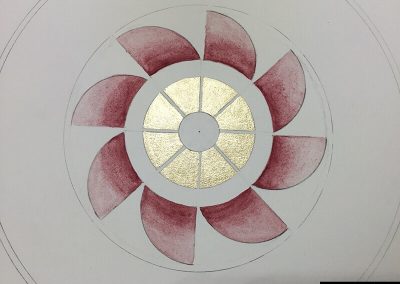 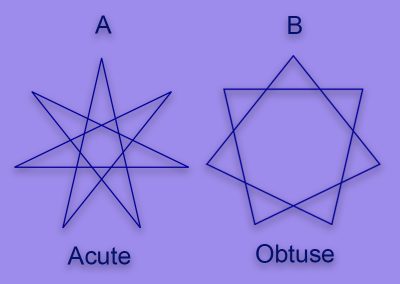 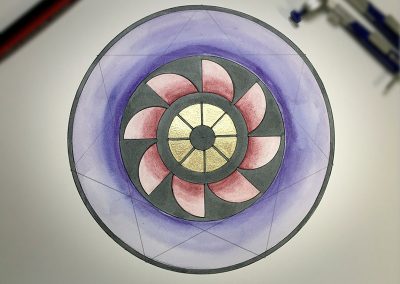 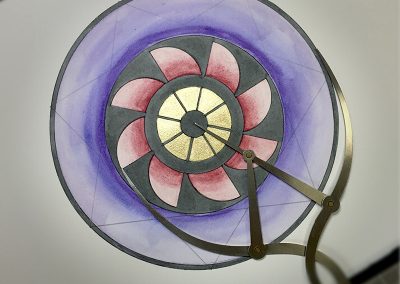 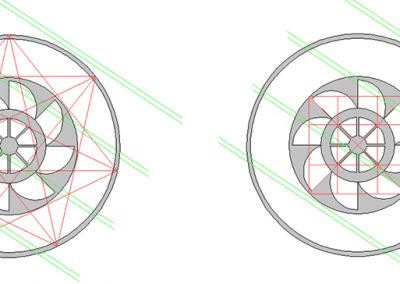 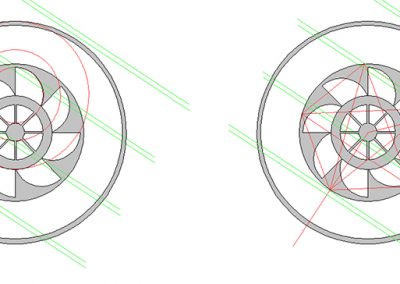 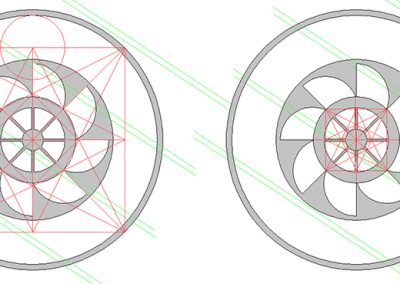