Detail: This circle was reported on the 2nd of June 2019, this area of Hampshire has been (historically) a regular site for crop circles in the early years (1970s/1980s). The crop type is young, green barley. This circle is fairly large and measures around 250ft in diameter.

For clarity, this crop circle is located next to Long Wood, near Littleton and Harestock in Hampshire. Long Wood refers to the woodland beside the field, not a village name.

Old and New: People new to the crop circles (and some of those not so new) don’t realise, or sometimes forget, that this phenomenon was born in the quiet, enchanted, long-sanctified places in our landscape. They were born from (and woven into) the myth and legend of this green and pleasant land (as Blake once called it). Early circles could often be found near ancient springs, burial mounds and hushed places of power. They drew attention to these long forgotten places, amplified, intensified and re-consecrated many of them into the modern age. The history and origins of this phenomenon are sometimes overlooked (or forgotten) in favour of more modern ideas about an alien industrial complex, that’s not to say that UFOs are not part of the crop circle narrative, but they often manifest as the mercurial will-o’-the-wisp, or small ball-shaped and aptly-named ghost-lights. This formation seemed like the perfect invitation to revisit a part of the landscape where the circles were first born and began to haunt the modern world. An apt theme for the beginning of a season!

Location: For the eagle-eyed, the circle is visible from the A272 main Hampshire arterial A-road near Winchester. The location is also not too far from Headbourne Worthy, another famed and regular site for early circles.

Flight: The flight was a choppy, bumpy affair with a brisk wind and a lot of cloud to contend with. As it was our first flight of the 2019 season, it was certainly a challenging reintroduction to to recording the circles from the air!

Design & Symbolism: This formation was a nice three-fold design. Three equidistant circles intersect and are locked in place by a fourth circle. The intersecting rings of the three circles create a nice tri-fold flower at the centre of the formation.

Three is a sacred number, Godheads of many types are expressed as three-fold – Father, Son & Holy Ghost, Mother, Maiden & Crone.  The human too, is often described as a sacred combination of Mind, Body & Spirit. Three is that which balances opposition and polarity, it is also a number which can simultaneously pierce duality – three can cut through and then reconcile. Three is therefore a sacred unity in its own right. Finally, three is a number of harmony; three notes combine harmoniously to create a musical chord. This formation spoke to me of origins (unity, circle), and the sacred healing of extremes with reconciliation and harmony (three). The fourth anchoring circle, brings this healing into the manifest world (four).

Design-wise, this circle reminded us of another circle from 2011 at Overton Down, Avebury. The Overton Down circle was four-fold, but the way the geometry fitted together is very reminiscent of this 2019 formation. See Geometry Gallery below for images and more commentary. Intuition tells me there might be something of Euclid’s second theorem in this formation, but that will only be confirmed for sure when I get it on the drawing table. 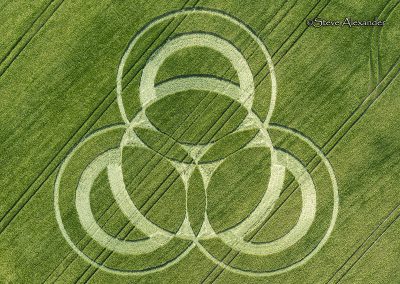 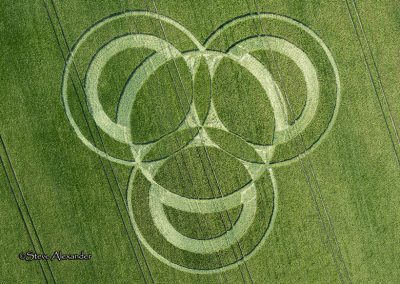 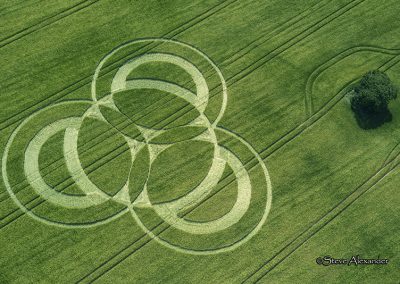 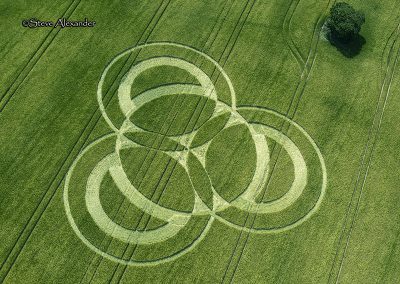 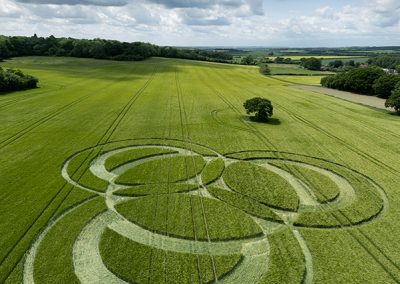 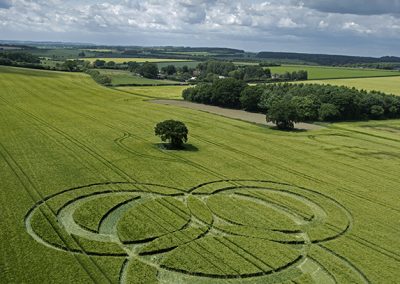 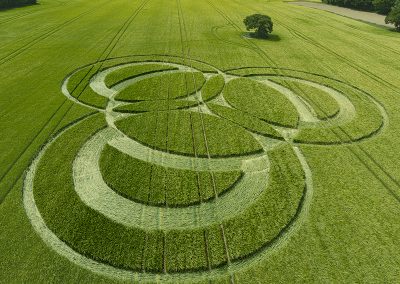 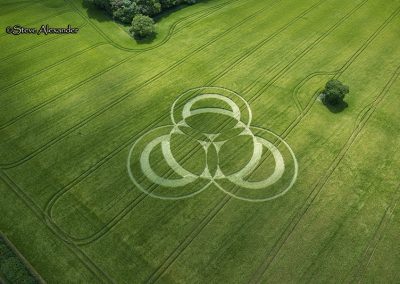 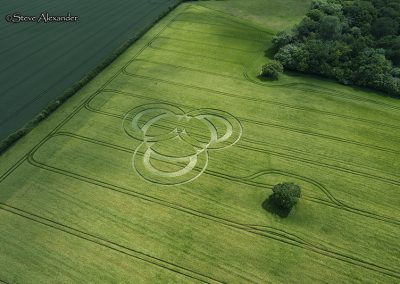 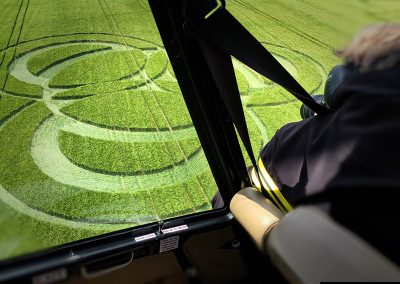 It was immediately clear while flying over this circle, that it exhibited the kind of elegance associated with some of the best crop circles. This combination of three circles of equal diameter is a classic geometrical image which has been repeated (in a myriad of differing variations) many times by the circle-makers, each subtly different, almost never repeated exactly.

There are many types of crop circle image, some purely geometric, some symbolic, some are more like contemporary hand-drawn illustrations – some of course, are a combination of any of the above. This circle was in the geometric/symbolic genre, using number and form to evoke meaning in the viewer/experiencer. I am firmly of the school that most crop circles have no fixed or exact meaning and that they work on both the left (rational, logical) side of thought and simultaneously the on the right (imaginative and creative). It therefore follows that any interpretation of them is both personal, and must use both imagination, intuition and rational and logical thought. When one visits the circles in person, one might add ‘sensation’ to this list, which brings the crop circle experience into the realm of Jung’s ‘Quaternity of the Self’ – Thinking, Feeling, Sensing and Intuiting. In other words, it requires the use of the ‘whole self’ to process the experience. We are not used to this in modern western culture, which values the rational and logical over the imaginative and intuitive. But logic and rationally, when untempered by the imaginative and intuitive can have a propensity for polarity, extreme literalism and ultimately, cruelty. One might say this describes accurately the times in which we find ourselves and why phenomena like the crop circles are so needed and have an important role in re-teaching a more healthy balance of mind. Crop circles may also play a role in healing an increasingly fractured world by reminding us through number, geometry, symbolism and image how connected all things really are – including the human race. There has been, for some time now, a gradual fracturing of our culture, and of ourselves, a slow march toward extreme isolation, even from ourselves. Our disconnect from the planet, from other cultures, and even from ourselves so amply epitomised by our confusion between reality and social media, has lead us to a precipice on which the viability of our own ecosystem, and even our sense of self is hanging in the balance.

The practice of geometry is a contemplative one, that likewise uses both the intuitive and imaginative with the logical and rational. The qualities (not just the quantities) of number serve as both metaphor and meaning hidden within the fabric of reality. When we look at geometry, we see number, but we also see proportion (or relationships) between the different facets of the design. Crop Circles speak a subtle and gentile language (most of the time), they quietly offer themselves as spaces, or patterns upon which we might exercise our whole self, and try out what that feels like. The Ancient Egyptians called this state of mind the ‘Intelligence of the Heart’, to know things not just logically, and rationally, but from within, from the heart. This kind of knowledge is no less valid, no less accurate, but it means rebalancing our modern conditioning that to instinctively feel, or intuit something is somehow only imaginary. We have even wilfully demoted the imagination to something that has no reality, meaning or value, yet the word Imago, from which it is derived, means something else entirely; it means to be complete, fully mature, self-actualised. If one were looking for a reason why the circles might be here, or what they may ultimately mean, this is a good place to start.

As numbers appear in the crop circles we discuss them. Three is a number we have seen many times over in the circles. Three can be a bridge, mediator, or active agent, it can triangulate between polarities, be a pivot or balancing force, it can also be the equipoise between heaven and earth, sky and ground. Three is crucial to our experience of time and space, we live in a 3-dimensional reality (up, down and side to side), we experience time as the past, present or the future.

In this crop circle we see three equally-sized circles, conjoined in an equal manner; here a triangulation of equals is depicted. These three circles are further iterated by a series of rings which they all contain equally, as these rings intersect they combine to create a three-petalled flower in the centre. There is in fact a fourth circle intimated in this design, which locks the three together, it is the central circle which contains the flower and seems to be lying atop the other three. This hint of four-ness may also suggest a hidden square in this design and a possible squaring of the circle (see below for drawings). The ‘Squaring of the Circle’ denotes ‘Sacred Space’, a space in which Heaven and Earth meet, or a space in which spirit can inhabit. Anyone who has sensed ‘presence’ in a crop circle will be unsurprised by this. I also found a nice Phi proportion on this design, for me Phi always represents the breath of life – a living geometry – and incidentally, uniquely, a three-way proportion.

The three-fold flower feels nascent to me, a beginning, a shoot of something new. It seems entirely apt that this should be considered the first major formation of the 2019 season. Let the unfolding begin…

Please see the images below, including a selection of analyses by Peter van de Burg – including circles and squares and Euclid’s second theorem.

All hand-drawings and paintings by Karen Alexander
With special thanks to Peter van den Burg for his diagrams below. You can see more of his work on his Facebook page Geometry of the crop circles. 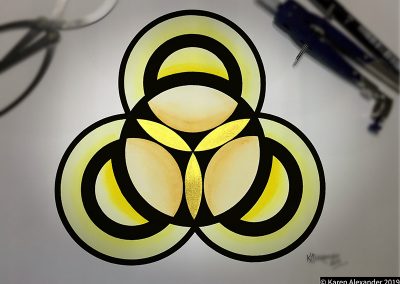 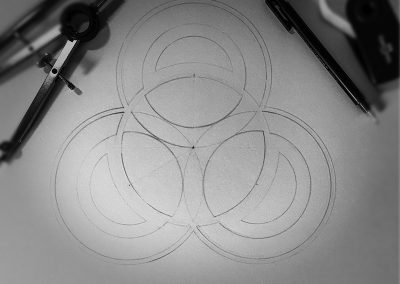 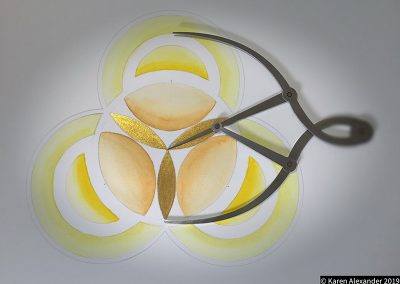 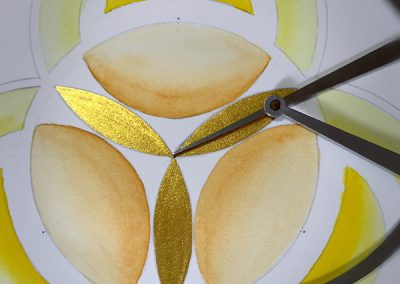 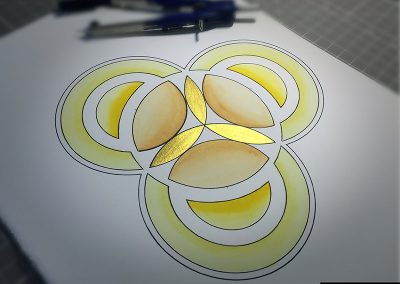 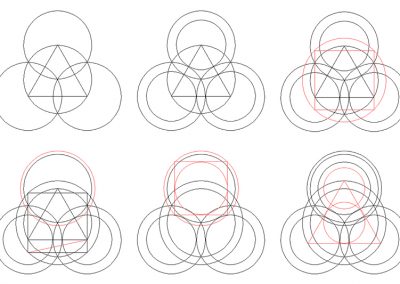 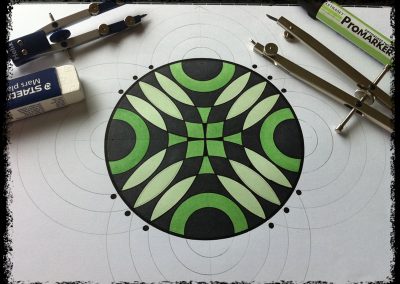 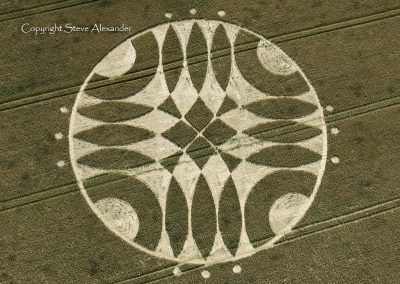 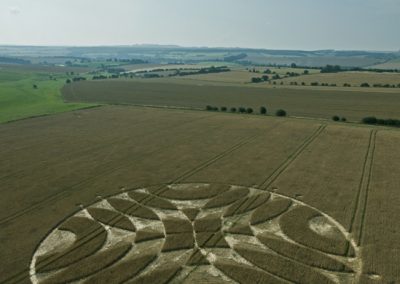 This circle has now been harvested.
Google Maps Link