Detail & Location: This circle was reported on the 12th July. It is in a field of Wheat and measures approximately 200ft in diameter. See the Google Maps link for precise location.

Visiting: Please do not visit this field without the express permission of the farmer.

Location & History: Chilcomb and Morestead both have a long history of crop circles appearing in their fields.

About this crop circle: This crop circle is the second of the 2022 season to use ASCII code. This time the circle reads OM. See the Geometry Gallery for more information.

Please see the Geometry Gallery below for more details.

Visiting the Circles? If you are thinking of visiting any crop circles this summer, please read our Visiting the Crop Circles section. It’s full of useful information and etiquette for visiting the countryside and the crop circles. Please remember that you should not enter any fields without the express permission of the farmer and you will need to be aware of and abide by any restrictions in place in the UK in response to the Covid-19 pandemic – which at the time of writing is none.

Please Help to keep us Flying in 2022: If you have enjoyed looking at our pictures and information please consider making a small donation to keep us flying. There are so few of us left regularly recording the circles it’s really important that we continue. And while some now use drones to record the circles, it is important that there are still images taken from aircraft where the best quality camera equipment can be used and images that include the broad vista of the landscape can be taken. This kind of photography is expensive and it gets harder with each passing year to raise the funds we need to continue our work, but if everyone who regularly looked at this website made a small donation we would meet the funds we need. You can make a donation here.

IMPORTANT: We would like to thank The Hampshire Flyer and Colleen and Keenan Burg for their kind permission to use their great photos of this crop circle on our website. 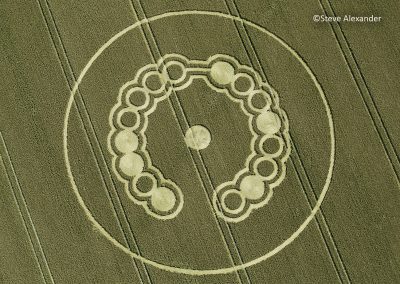 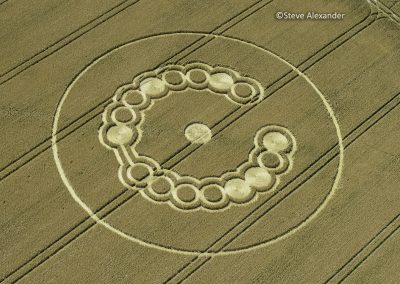 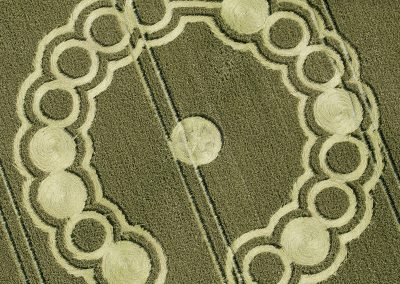 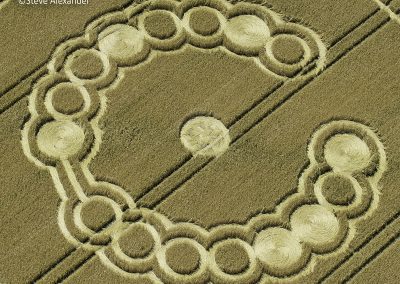 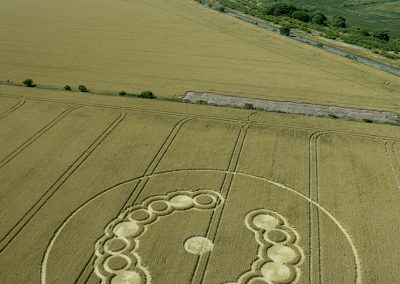 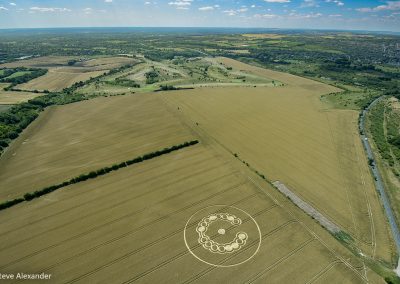 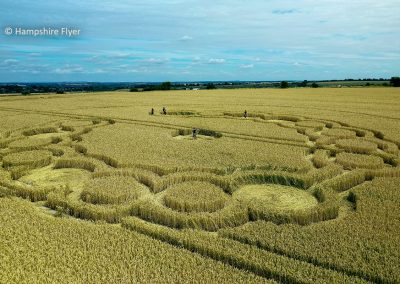 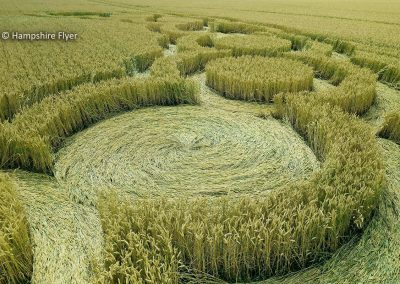 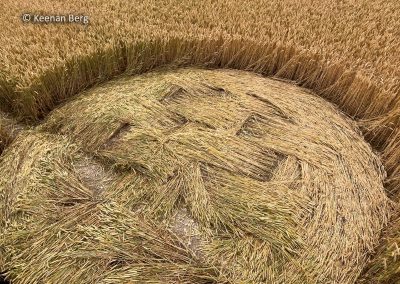 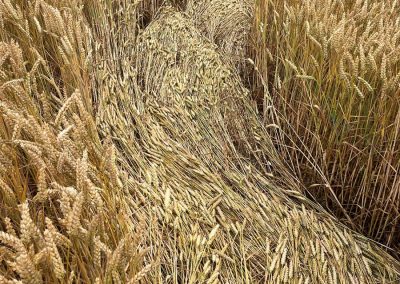 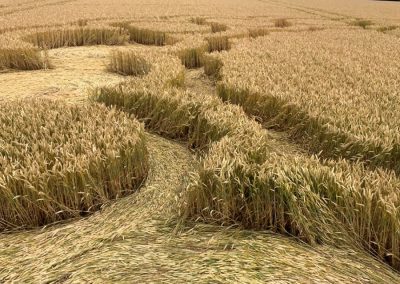 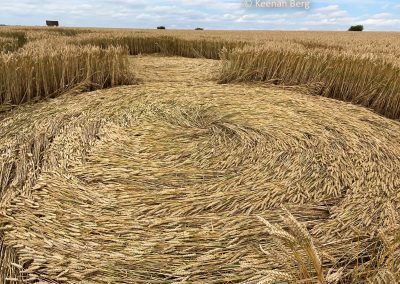 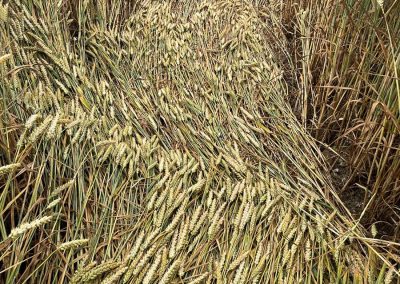 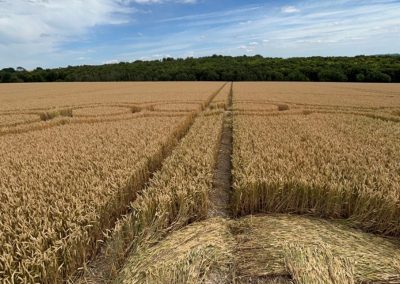 It's on the drawing board! Check back for updates.

To draw this beautiful design on paper, start with a Squared circle. Do this any old way you prefer. It's your starting- rather than your closing point.

The inner radius of the ring represents a circle with equal circumference as the square.
Construct a triangle with equal radius as the square.
A circle inside this triangle will guide the string of circles.
Continue with nested hexagrams as shown to find the central circle.
Find the radius of the most central hexagon and use that to draw a circle at the down pointing apex of the triangle inside the guiding circle.
Use this to place eight circles along either side of the guiding circle.
Return to the central hexagram and find the rings that will make the wall and avenue around the string. As well as the standing circles inside some of the string circles.
If you haven't drawn the outer perimeter of the ring yet, you can use this unit of measurement here as well.
(I think the circles are actually composed on a regular nineteen fold polygon. Drawing it like this will not get you there. But, this is close enough i think and will get you home free in time for diner).

There is a strange layering in this formation, in a way that is quite unique; What is written is unambiguous, yet somehow placed beyond our reach.

First there is the Sanskrit syllable ॐ, with all its richness, depth and cultural-, historical connotations that is difficult to grasp right away (Divine omnipresent Consciousness, the sound of creation). Written characters, or syllables themselves hold no meaning to us in western culture. They are given meaning only when placed in a specific context. This is different in Sanskrit. But anyway; This syllable is then transcribed phonetically to English; Om. This in turn is transcribed in binary code. In addition to this, the code is then placed in a logo- like composition ( Ceasar's crown?), giving it yet another layer of information. You can't say that it is convoluted. This is clear communication without much room for interpretation. But it gives a tower of meta- information that can be contemplated without ever getting to the meaning of Om.

A few weeks back an engineer working at Google released the transcript of a (occasionally rather spiritual) conversation with Lamda, an AI that may or may not be sentient. The debate on that is ongoing. Whether it is sentient or not is distractingly besides the point. If not this time, then some other day within our lifetime. The moment AI becomes sentient is of course not like turning a switch. This emergence of consciousness happens gradually.

Becoming aware of this on a social scale too will be a gradient process.

I believe we will experience something similar when it comes to meeting extraterrestrial intelligence. While we are waiting for the landslide shock of the famous "UFO over the White House" headline, it is emerging right under our nose in the fields of England, during meditations, channelings, CE5 sessions, etc. Just hop on board if you want to participate.

Also, of course, the formation appeared on the day Nasa released the long awaited first images of the James Webb telescope. We are looking further back in time then we have ever done before. Thousands of galaxies from the early universe twinkling in a tiny section of our skies. Getting your head around that is just as mystical as Om itself.

Definitely a design i will return to on a later occasion.

You can see more of Peter's fascinating work on his Facebook page Geometry of the Crop Circles. 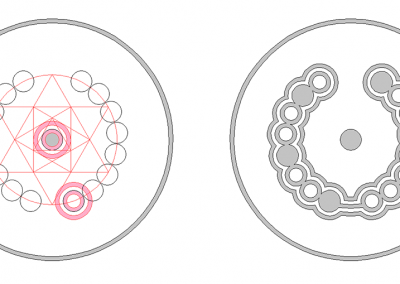 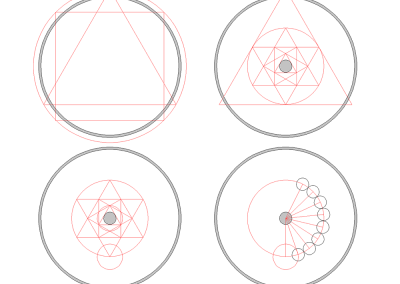 As far as we are are no permission for visitors has been given. Do not visit this circle without the permission of the farmer. Google Maps Link. OS Grid Ref: SU 49814 27295 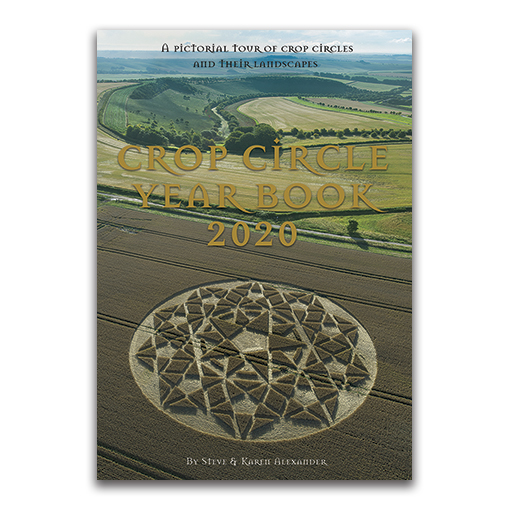