Detail & Location: This circle was reported on the 22nd of July. It is in a field of maturing wheat and measures approximately 200ft in diameter. See the Google Maps link for precise location.

Crop Circle Reporting and Covid-19: After considerable thought and consultation, we have decided we will not be censoring crop circle locations during the Covid-19 pandemic. There are no current restrictions in place in the UK that call for a blanket ban on visiting the countryside. We consider the reporting of crop circles to be in the spirit of journalism, and censorship to be an anathema to that spirit. Therefore, we will be treating the crop circle community as adults and asking everyone to approach the information carefully and responsibly. This will include not visiting the circles if the farmer has not given explicit permission to do so and should permission be given that they practice social distancing by staying 2 metres away from fellow visitors. It would be our very strong advice that visiting the crop circles on the ground should be kept to an absolute minimum for now. However, because we know that the location of any given circle can be important to researchers and those that record the circles from the air, we will continue to share what we know.

Flying during the Covid-19 Pandemic: Thanks to the hard work of all at Heliair, Thruxton, as of July 20th we have been able to return to the air to record the 2020 circles. We will still be working  along-side the excellent AEROBO (Art in Flight) who will be helping us collect images and drone footage of the latest crop circles to share on the website.

Visiting: As far as we are aware no permission has been given to visit this crop circle. Please do not visit this circle. Thank you.

History & Connections: Bishops Sutton has a long association with crop circles. There have been several formations close to this location in the past. Bishops Sutton is not far from Cheesefoot Head, Longwood Warren, Chilcomb Down and Telegraph Hill – all known for their wonderful iconic crop circles over the last 30 years.

Design & Symbolism: This is such an interesting crop circle. Behind its seeming simplicity lies a very elegant five-fold geometry, one we do not see very often used in the crop circles. We are very used to seeing the pentagram star, it is a very common shape used in crop circle design, but this elegant little flower is the shy, but beautiful sibling of the pentagram and to me is the true Flower-of-Life as it contains the life-giving generative power of the Golden Section. In one of those strange coincidences that seem strangely attracted to the crop circle phenomenon, I had been drawing this very design in a series of geometry class I have been attending. It was wonderful to see it appear in the fields and to get to fly over it, I’m very much looking forward to drawing this circle and will update this page again with drawings and analysis as I complete them.

Visiting the Circles? If you are thinking of visiting any crop circles this summer, please read our Visiting the Crop Circles section. It’s full of useful information and etiquette for visiting the countryside and the crop circles. Please remember that you should not enter any fields without the express permission of the farmer and you will need to be aware of and abide by any restrictions in place in the UK in response to the Covid-19 pandemic.

Please Help to keep us Flying in 2020: If you have enjoyed looking at our pictures and information please consider making a small donation to keep us flying. There are so few of us left regularly recording the circles it’s really important that we continue. And while some now use drones to record the circles, it is important that there are still images taken from aircraft where the best quality camera equipment can be used and images that include the broad vista of the landscape can be taken. This kind of photography is expensive and it gets harder with each passing year to raise the funds we need to continue our work, but if everyone who regularly looked at this website made a small donation we would meet the funds we need. You can make a donation here. 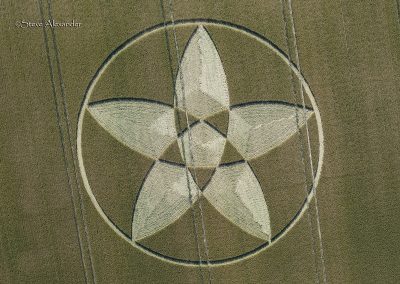 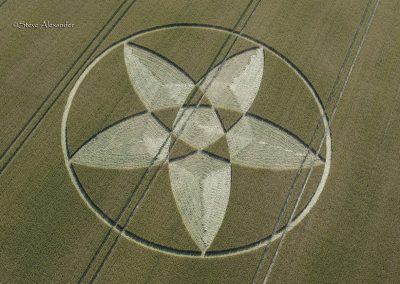 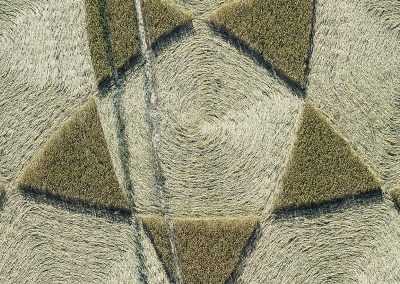 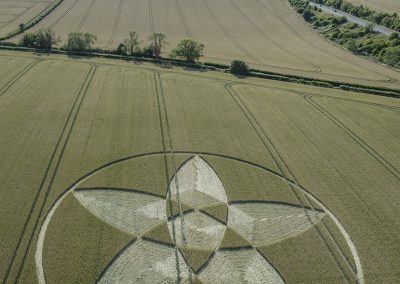 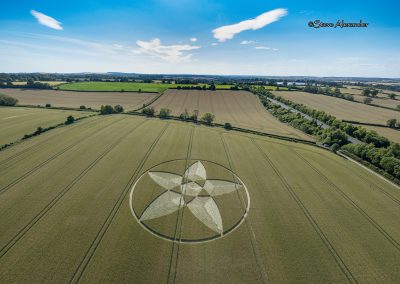 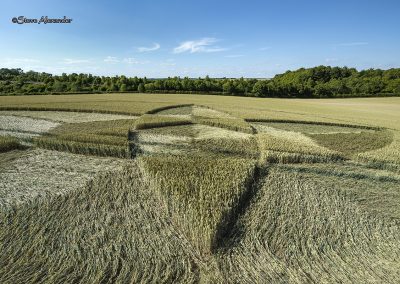 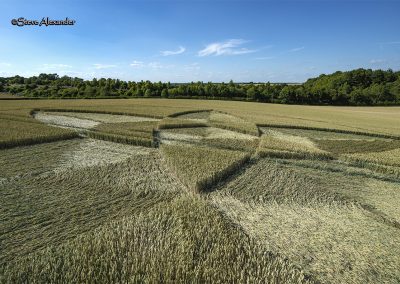 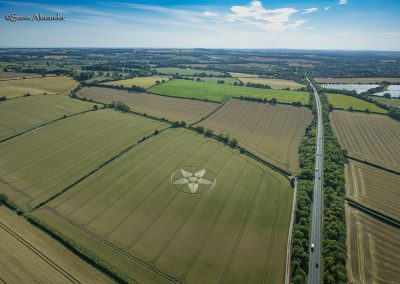 A True Flower of Life?
by Karen Alexander

Note: Click on any of the image to enlarge. 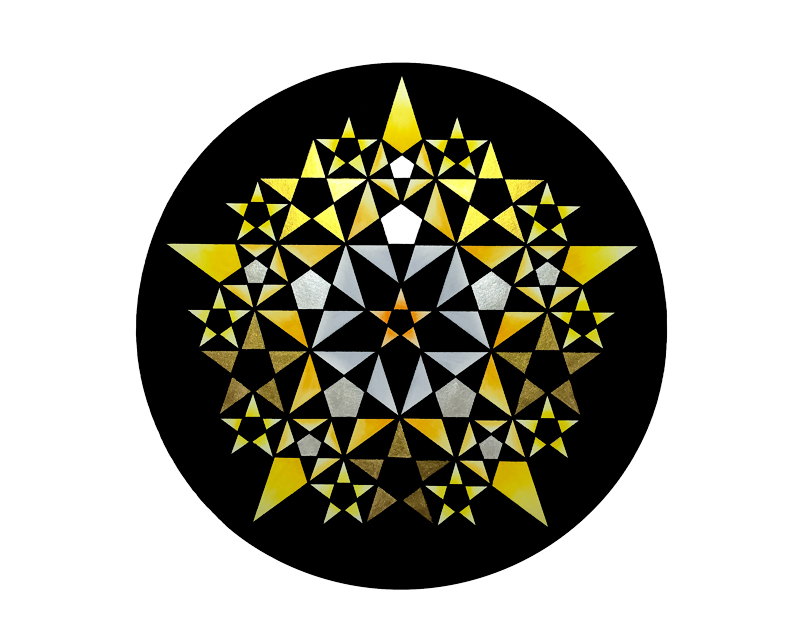 A garland of pentagrams at Martinsell Hill 2018

The Pentagram Star
Beyond the seeming simplicity of this crop circle, is an interesting geometry and symbolism. We are all familiar with the pentagram star, its first appearance in a crop circle design at Bythorn in September of 1993, then returning in 1997 at Bishops Cannings, to then appear with some regularity throughout subsequent seasons, always in some different configuration, sometimes paired with another pentagram, other times alone - by 2018 in the Martinsell Hill formation the pentagram had multiplied into a virtual shower or garland of stars.

Five and Phi
The pentagram star has been a favourite of humanity for millennia, the star is associated with the heavens, the eternal, the soul - for the Ancient Egyptians the soul travelled to reside amongst the stars after death, the heavens, the planets and stars were their company of Gods. The associations that link all these ideas together are not merely arbitrary or even, indeed, simple literalisations, or dead metaphors, they are deeply symbolic. The pentagram star is also the generator par excellence of the Golden Section the proportions of this star are a veritable encyclopaedia of Phi relationships.

Five is the number and geometry associated with living things - life. it is found in the proportions, and growth patterns of all living things on planet Earth. This fact is quite remarkable, in a world we are encouraged to think of in terms of coincidence, blind chance and happenstance, that this number seems reserved for living forms is almost suggestive of an underlying organising principle, or as the physicist and philosopher David Bohm might have phrased it an ‘implicate order’. 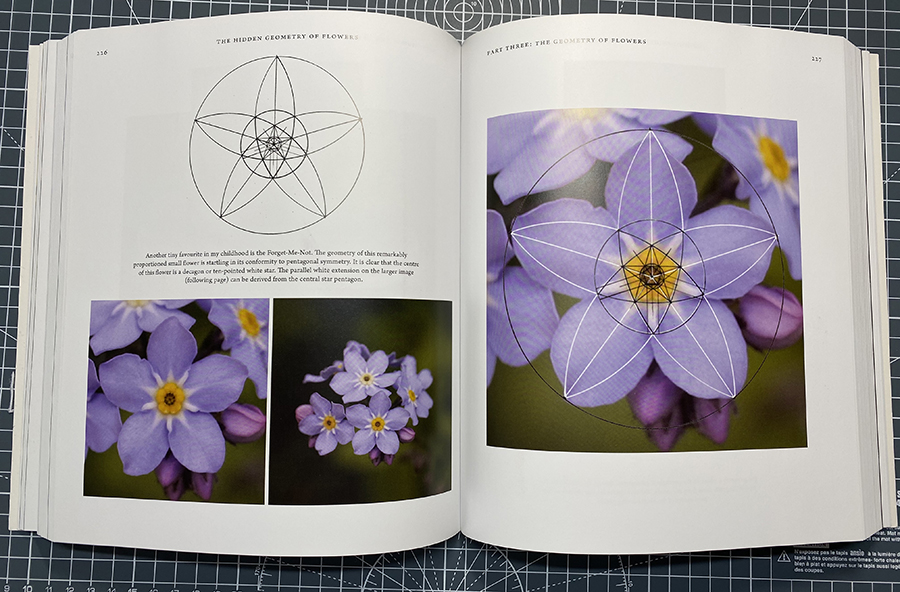 Fig.2 The geometry of the Forget-me-not by Keith Critchlow

The Flower of Life?

But in this particular crop circle, we are not dealing with the traditional pentagram, we are dealing with a true flower-of-life; a flower with five equidistant and self-similar petals. Pop-geometry often refers to an arrangement of six circles around a seventh as the flower-of-life, but while six-fold geometry organises much of the natural world, it is the inanimate world that it is mostly associated with, whereas five is found in abundance in living forms - in both the animal and plant world.

This five petalled flower can be found in the geometry of the humble forget-me-not (amongst others) as found in Keith Critchlow’s jewel of a book ‘The Hidden Geometry of Flowers’. Fig. 2. 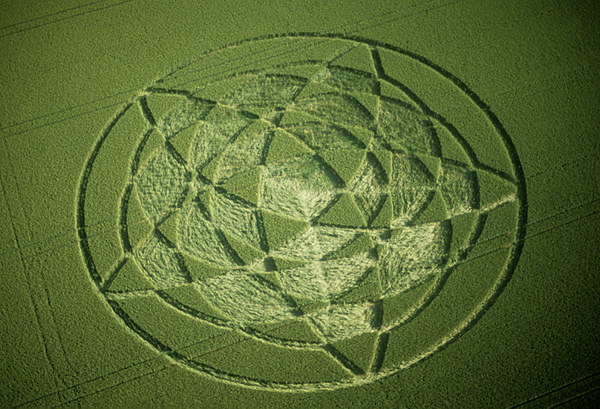 A Crop Circle Rarity
In the crop circle world, this particular expression of division by five is rare. In fact while discussing this with other researchers, Peter van den Burg and I only found one other instance, at Avebury in 2002 (see fig. 3). But here its form is obscured by quite a busy geometry which sits over the top. Interestingly, you can see at the centre of the formation the same smaller five-fold flower created by the overlapping of the larger petals seen in the Bishops Sutton formation. 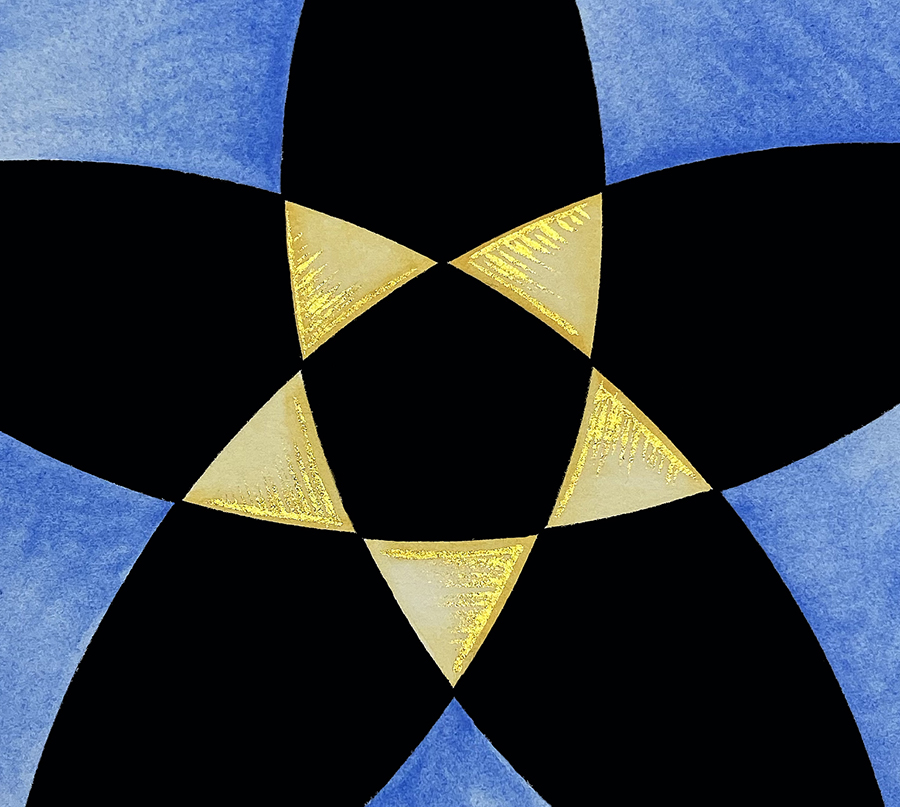 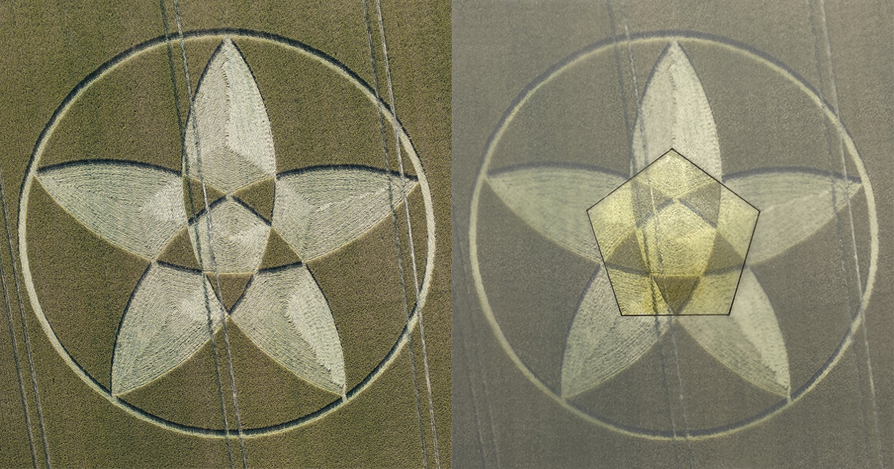 A Hidden Pentagon
The laid crop in this circle also forms part of the pattern - notice that the flow and sweep of the crop forms a containing pentagon around the smaller centre flower of this formation - that was a nice touch. I also notice that the design of this circle would allow for an easy division by 10 - this felt like an expression of the ‘potential’ inherent in all five-fold geometry for generation and regeneration - a key quality of the number five.

I would be interested to hear from anyone who knows of any other circles which contain this rare flower configuration.

A Synchronicity
In one of those strange synchronicities that seems to be attracted to the crop circle phenomenon, I had been drawing this exact five-fold flower during a geometry class I had been attending. The class was held on the 15th of July, the crop circle appeared 6 days later on the 22nd - it would have been even more fun if it had been on the 21st (five days later!). As we flew over this circle, it was amazing to see something I had been recently drawing scaled up to approximately 200ft and in a field of wheat! 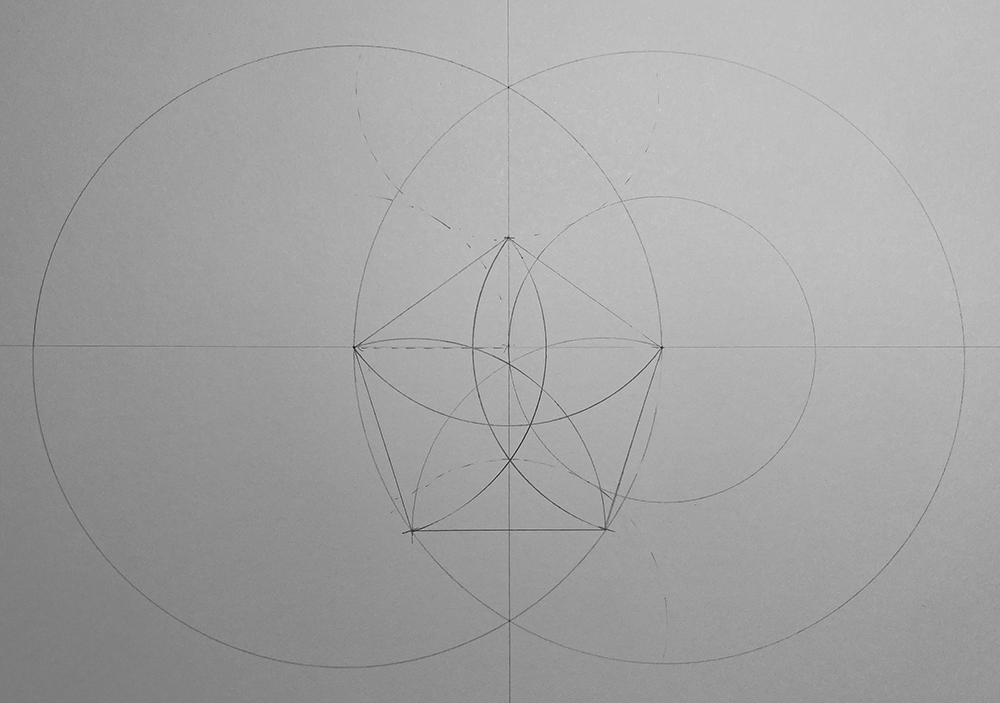 There are several ways to divide the circle into five equal sectors, we had drawn three during my class. My favourite though was one taught by the great geometer Paul Marchant  - which features in my pencil sketch.

Conclusion
I loved this circle - it was like finding a rare wild flower - something to marvel at, something beautiful, elegant and a reflection of the divine at work in the natural world.

Everything ɸ starts with this diagram of a circle, a circle half its size and the vertical- and horizontal axis. (Because Pythagoras' theorem will tell you that the long side of a right sided triangle (red) with sides 1 and 0,5 is √1,25 or 1,11803399. Add 0,5 (blue) will give ɸ.)

This will give you the √ɸ rectangle, Golden rectangle and pentagon. Combine the two rectangles to create the ring. Create the pentagon and draw semi circles from one vertice to its neighbouring two to make the flower pattern.

The ring determines the opening through which the flower can be entered. The centre standing triangles have a slightly smaller radius to allow for a gap between the petals. This is found by the crossing of a straight lined pentagram and the ring.

The ring has its own pentagonal relation with the tramlines and stand in 45° angle compared to the formation.

Why a Phi formation on a day that is reserved for π (22/7)? The two are related and a Squared circle can be found using the ring alone, but it is not particullarly expressed in this formation. I think the question still stands.

Thanks & Credits
I would like to thank some of my crop circle cognoscenti for their help in forming these ideas: Steve Alexander, Peter van den Burg and Jonathan-Paul DeVierville.
Text | Hand-drawn Images by Karen Alexander.
With special thanks to Peter van de Burg for his thoughts, perspectives and analysis. You can see more of his great work on his Facebook page Geometry of the crop circles.
Golden Section Proportioners by Scott Onstott.
Please enjoy the diagram below by Bertold Zugelder. 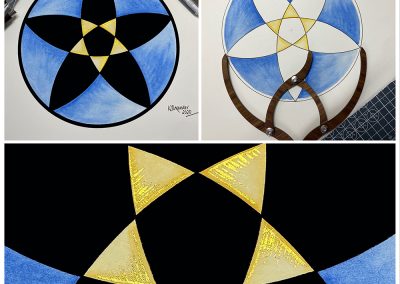 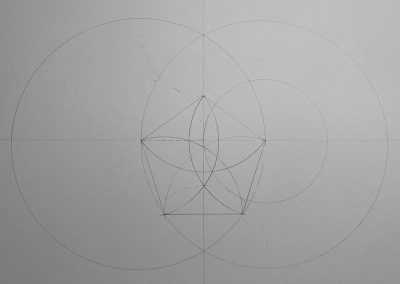 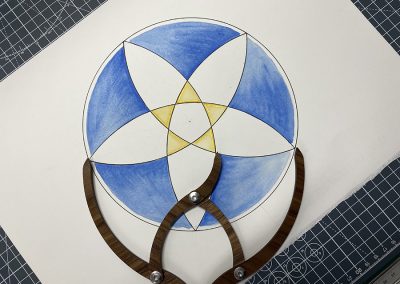 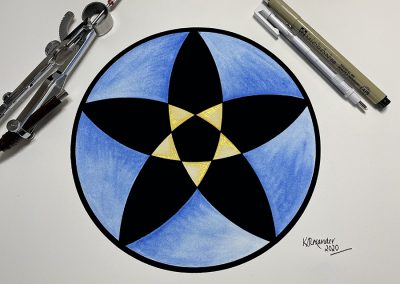 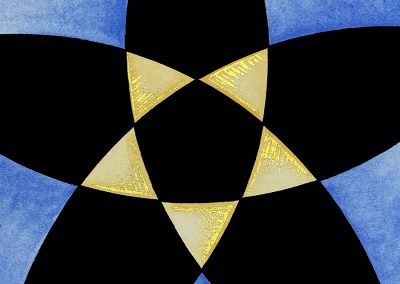 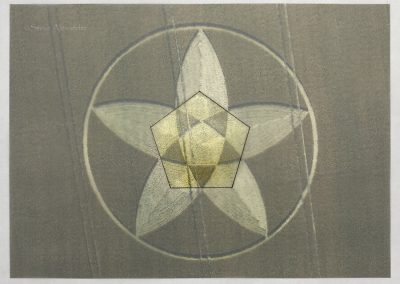 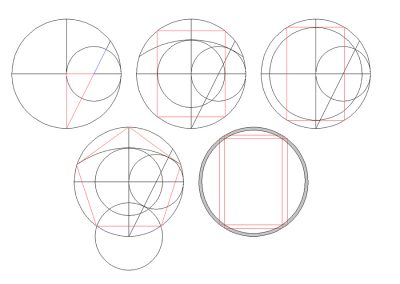 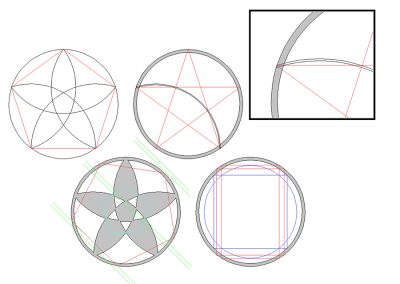 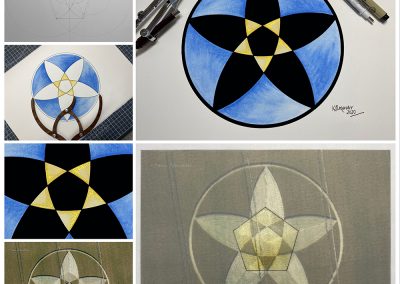 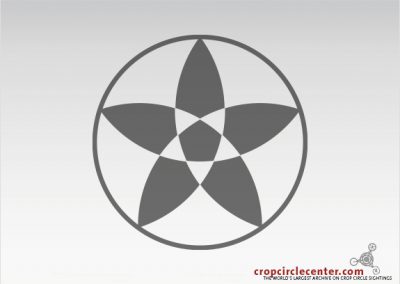 No permission has been given to enter this circle.
Google Maps Link 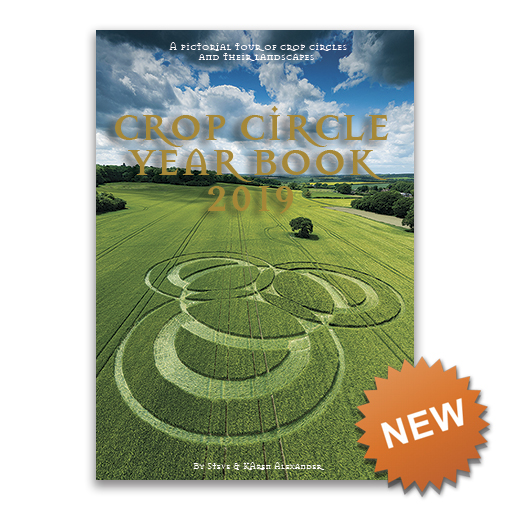